YOU HAVE YOUR EYES ON THE THINGS OF THIS WORLD 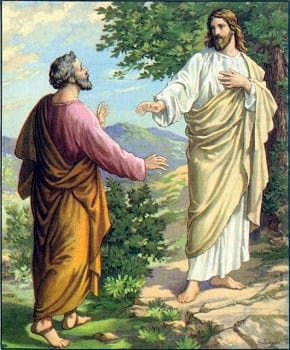 YOU HAVE YOUR MIND ON THE THINGS OF MEN

31And he began to teach them that the Son of Man must suffer many things and be rejected by the elders and the chief priests and the scribes and be killed, and after three days rise again.

32And he said this plainly. And Peter took him aside and began to rebuke him. 33But turning and seeing his disciples, he rebuked Peter and said,

When Lord JESUS started warning his disciples about his future passion, death and resurrection; he told them this not only to give them confidence for when that time came, but also to give them joy by telling them of his resurrection.

We do not know how the apostles and other disciples took this, or how much they believed in his words (Mark 16:13); but Peter loved Jesus, and it seems that even though he had been previously blessed for declaring openly that Jesus was the Messiah and the Son of God (Compare Matthew 16:13-20 with Mark 8:27-30), he still did not have the spiritual maturity of an apostolic witness, because ignoring the words about his resurrection, he tried to dissuade Jesus from giving himself to death.

Peter did not do this out of lack of faith. He must have believed that Jesus could come back to life.

He did not try to stop Jesus from dying because he wanted Jesus to fail in his mission. He did it out of naïve ignorance and lack of spiritual discernment.

Peter did not understand the need of Jesus’s atoning death for the redemption of humanity. He just thought about the terrible death that Jesus was about to give himself to and wanted to spare him the suffering, even probably to the cost of humanity’s salvation.

Lord Jesus understood this, but he called Peter an ‘opposer’ (Satan), because he wanted to give all the present a lesson (v.33).

The disciples had lived with Jesus daily for probably three years by then, and they should have been aware of the purpose of Jesus’s ministry, but they were not. They still needed spiritual maturity.

When Jesus rebuked Peter, he meant what he said for everyone listening that may have still had their minds set on human feelings and views.  He called Peter an ‘opposer’ for by putting his mind on human reasons, he was becoming an obstacle in the way of God’s redemptive plan.

Peter and all the disciples, should have had his eyes set on God’s overall plan, and not in limited human perception; and thus, be a support to Jesus in his sacred mission, which transcended all human concerns.