THE THEOREM OF THE INFINITE MONKEY 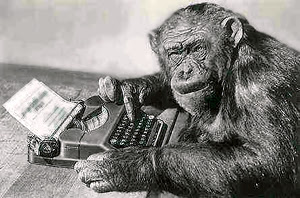 THE THEOREM OF THE INFINITE MONKEY

The French matemathician Emil Borel, in 1913, brought forward an idea that contains the following reasoning:

“If a monkey were to randomly type for an infinite period of time over a typewriter, eventually, will end up producing a book similar to the ones written by Shakespeare”.

This, of course has nothing to do with the English writer, or subjected only to his works, but to every person that has ever existed. What it says in more comprehensible words, is that infinitude is long enough to engulf all possibilities, even to the point of creating anything we may consider extremely fine or difficult to obtain in our limited world.

This is mathematically possible, but it is even further surprising if we apply this to life in the universe.

As it has been said before, it is childish to believe that God started his creation with us, considering he is a natural creator and that is eternal. God must have, by logical thinking, been creating from eternity, continues now, and will continue creating after we are glorified, for all eternity. That is his nature.

So, in these infinite creative acts, God must have created beings like us, maybe even in looks and nature, but never totally equal. This can be proven even now, since if we could take all finger prints from all people on the planet, we could not find two equal fingerprints. Uniqueness is a fact of life. So, creation must contain an infinite number of universes parallel to ours. And even more, though unlikely, other intelligent life in this universe of ours.

But whatever the cases are, and besides the point that this is a strong proof that a Creator exists from all eternity, since this eternal creation process needs always a pre-existing energy to start the motion, and considering that the created universes are by virtue of their limited nature within infinity, always expanding; it also proofs the uniqueness of human life and the love of God for humanity.

We know that the Word of God incarnated into human nature, the only begotten Son of the Father (1John 4:9), to produce an atoning-expiatory sacrifice in exchanged for the guilt of humans who repent, so that they could return to communion with the Father without suffering the right punishment for their sinfulness.

We also know that God made this only for the descendants of Adam, and not for angels, animals, or any non-Adamic creature.

Being the man Jesus of Nazareth, the only Son of God incarnated (1John 4:9), we also know that God has no other sons to do the same for other creatures, but what about Jesus taking other forms of life and paying the same atonement he paid for us?

Some Christians believe this, especially since the Bible is only written for our world and the human race, and apparently keeps silence over it. However, this same Bible also bases its theology on universal eternal concepts that are immutable and transcendent into all levels and forms of creation.

The Bible says that JESUS created all things visible and invisible, and at all levels, to the point that before him, nothing existed, placing him at the same eternal level as GOD the Father (Colossians 1:16-17).

The Bible also mentions that in the act of redemption, Jesus died only once for all times and that with that single act, he achieved eternal redemption (Hebrews 9:12, 26-28); as well that he will be the one subjecting the whole of Creation to God; and that all knees will bent to him ‘under Heaven’ (Romans 8:21-22; 1Corinthians 15:27-28; Philippians 2:9-11).

Given these immutable concepts, like things invisible (Angelic and spiritual creation), Creation (Whole of creation, in this and other universes), and ‘under Heaven’ (the world of death and hell in general); it is hard to give credit to those theories that teach that God has other redeemers, or that Jesus will suffer again for the expiation of sin.

THEREFORE, this leaves only us, humanity, on focus.

That is why the Scripture says:

“For God so loved the world that he gave his one and only Son, that whoever believes in him shall not perish but have eternal life.”

It seems clear that GOD, even though is an eternal creator; has created other forms of life either unable to sin and without free will, or others that have not enjoyed the same call as us, and therefore, have not been redeemed.

In this case, only humanity would enjoy free will, and a redemptive act at the same time.

If that is the case, this will place humanity in the apex of creation, making us a unique and privileged creation of God, called to an even greater future.

The idea that we have been chosen from all eternity to be humans, part of a living race called to be similar to the creator (John 10:34), should make us feel full of gratitude to a GOD who has loved us from the beginning, and has prepared for us an incomparable Glory.

“No eye has seen, no ear has heard, and no mind has imagined what God has prepared for those who love him.”