NOBODY WHO DOES A MIRACLE IN MY NAME, WILL LATER SPEAK EVIL OF ME 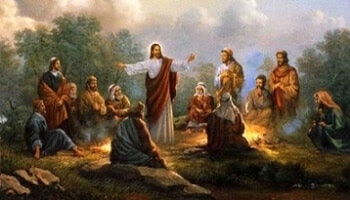 NOBODY WHO DOES A MIRACLE IN MY NAME, WILL LATER SPEAK EVIL OF ME

“Teacher, we saw someone casting out demons in your name, and we tried to stop him, because he was not following us.”

“Do not stop him, for no one who does a mighty work in my name will be able soon afterward to speak evil of me.

40For the one who is not against us is for us.

41For truly, I say to you, whoever gives you a cup of water to drink because you belong to Christ will by no means lose his reward.

Lord Jesus and his apostles had just arrived to the region of Galilee, in the area around Capernaum (Mark 9:33; 10:1).

Since our Lord had grown up in Galilee, in Nazareth, his ministry was well known in that region, and that is where most scholars think he appeared to more than 500 people at the mountain after his resurrection

Since the NT calls them disciples, there must have been a lot of true followers of the Lord there.

In their way there, the apostles crossed a man, unknown to them, since ‘he did not walk’ with them. It means, he was not a regular member of the community of believers that normally followed our Lord, like the 70’s (Luke 10:1), Martha, Lazarus and Mary, or the twelve apostles, and other close disciples.

However, this man must have truly believed in Jesus, since he casted out demons in his Name. For if he had not, the invocation of the Lord’s Name would not have worked through him (Acts 19:15-16).

The apostles, as many of us are today, were more concern about the communion of this man with the main ‘official’ group of believers, than with the fruits that proved this man a genuine Christian.

But our divine Lord, in his wisdom, said to them ‘Do not stop him, because whoever does a miracle in my name, will not be against me’

This day, our Lord proved that there was not doctrine, or sacraments, or anything else we could add for the salvation of our souls, but only faith, repentance and perseverance to the end.

This man, must have believed Jesus’s preaching, repented and submitted to the Lordship of Jesus. He must have been accepted by God as a child of his, and that is why he could continue the mission of Christ by liberating people from the joke of Satan, and he did it effectively (v.38).  But he did all of these things while not belonging socially to the main group that were called ‘followers’ of Jesus.

By accepting his ministry, our Lord declared that what constitutes us as Christians and Children of God is our faith and repentance, which causes the descend of the Holy Spirit on us and into us (Ephesians 1:13; 4:30).

Sacraments, belonging to this or that Church, and everything else, are visible signs we are Christians and followers of Jesus, but it is our faith and love for God what makes us truly Christian; and Jesus the only ground of our salvation.

When we stand at the tribunal of God, we will not be submitted to a knowledge examination or a conduct case. Certainly, our knowledge and our actions will be considered, but they will serve nothing to our final salvation, except the mercy of Jesus, our Savior, who will come to our rescue in basis of his sacrifice on the Cross, our faith and repentance. Only then, forgiveness will be granted, and we will be admitted into the Kingdom of God.