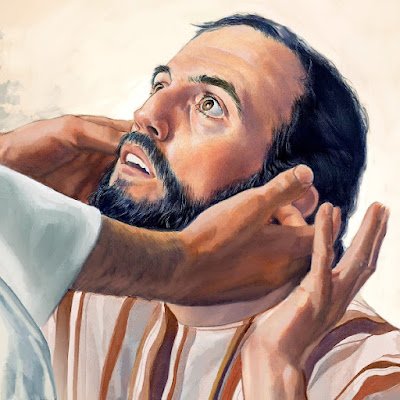 32And they brought to him a man who was deaf and had a speech impediment, and they begged him to lay his hand on him.

33And taking him aside from the crowd privately, he put his fingers into his ears, and after spitting touched his tongue. 34And looking up to heaven, he sighed and said to him, “Ephphatha,” that is, “Be opened.” 35And his ears were opened, his tongue was released, and he spoke plainly.

36And Jesus charged them to tell no one. But the more he charged them, the more zealously they proclaimed it.

37And they were astonished beyond measure, saying, “He has done all things well. He even makes the deaf hear and the mute speak.”

He continued his ministry by going back to the Eastern shores of Galilee, also in the border of the area controlled largely by Roman autonomy, where Arabs, Greeks and Assyrians abounded, together with Jews.

While preaching in these areas, in one occasion these people, brought to the Lord’s attention, one man who was a deaf-mute, to be healed, but who seemed not so sure of Jesus’s power, or at least some of them present.

In this occasion, the same Jesus who had freed the Phoenician woman’s daughter from demonic possession by his mere desire from a distance; now used visible physical means to achieve this miracle.

He placed his fingers into the man’s ears, and touched with his own holy saliva the deaf-mute’s tongue; and by ordering ‘BE OPEN’, the man recovered his hearing and speech in an instant.

Jesus used these actions, not because he needed to, but out of his mercy.

He created a visible association of his own person’s power with the healing the sickness; thus, confirming his authority in front of many who were not sure of him, or who had not known him before, specially in this area, highly influenced by Greek reasoning.

Jesus achieved his purpose, and even when he requested discretion from the people who had been present there, they were so amazed that did not stop proclaiming his glory and message to wherever they went.

Thus, our Lord brought salvation to many unconverted Jews and pagans, from far passed the Jordan.