ARE THERE EXTRA TERRESTIALS IN OUTER SPACE? 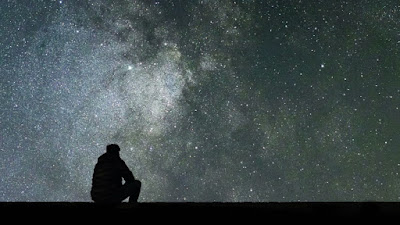 ARE THERE EXTRA TERRESTIALS IN OUTER SPACE?

To everyone it is plain clear that the space we see in a night full of stars, is an extremely extensive area. Area that we have never covered, we ignore, and scarcely we wonder we will ever get to know fully. However, it is part of creation, it exists by the will of God and it has a purpose, that at least for now, it has not much to do with our existence.

The Bible explains only human existence, and it is not concern with life beyond Earth, even though mentions angelic life as they alternate with us, but not beyond.

Genesis, starts by asserting that God is the creator of everything material that we can see, meaning our planet, the moon, Sun, and stars; and then jumps to deal strictly with our planet and the beginning of life on it; leaving aside all mention of outer space, except in regards of how we perceive the celestial bodies from Earth (Sun, Moon, stars); but only in what concerns to life on this planet.

The Bible also tells us, that the sin of Adam affected all creation bringing death and decay, and that the redemption effectuated by Lord Jesus, will also affect creation as a whole, bringing restauration and blessing (Romans 8:19-22).

This ‘πᾶσα ἡ κτίσις’ (Entire Creation) in the mind of the writers, was the whole cosmos we observe in outer space, and everything else we can perceive as part of this material universe we exist in, including all that vast area we observe at night time beyond in the open sky.

But if we are the main protagonists in this material universe we perceive, where or how will other advanced intelligent beings will exists?, Where are they and why we have not made a clear contact yet?. Furthermore, what would be their position, in case they do exist, in Jesus’s Plan of Salvation?

It is naïve to think that God started creating suddenly our universe, knowing that he is eternal. It is natural to assume that God, since he exists forever, he has been creating for all eternity, specially since the Bible nowhere says that we are the only creation work God has ever done or will ever do. If God has always existed, he has always been the way he is now, doing the things he does now, and one important aspect of his nature, is to communicate life, through creation.

And in the vast time frame of eternity, it is also logical to assume that somewhere along that eternal process of creation, God at certain point may have created similar beings to us, somewhere in another universe, and even possibly in ours, even though it is highly unlikely.

If other intelligent spiritual beings have been created in other physical universes or dimensions, we do not need to worry about meeting them at all, at least in this life.

But if God has created intelligent beings in our universe, it is a different matter.

We know that sin entered our existence, because we decided to disobey God, and that proves that we were granted power of decision, perfect freedom.

We also know that God loves us in an incomparable manner in relation to other creatures. He incarnated as one of us, to offer himself as an atoning blood sacrifice for the salvation of our kind. Thing that he has never done, not ever do again for anyone else (Romans 6:10; Hebrews 7:27).

If other intelligent beings have been created in our material universe, they may be similar, but not exactly like us.

To be able to fall into sin, humanity was gifted with free will. And to save us from our bad decisions, God provided an atoning sacrifice on our behalf, that only covers the descendants of Adam, and no other creatures (Romans 5:12,17). This would leave other intelligent beings, if there are any, in either two positions. Either they were created perfect, uncapable of sinning, or they are, like the angels, deprived from possibility of redemption, and their existence is conditional.

In either case, that will be also the case of other creatures in all the universes and dimensions, since God effectuated this incarnation and atonement only once, and he exists now in glorified human form for all eternity, in the person of Jesus of Nazareth (John 1:14; 13:31-32; Acts 7:55; 2Corinthians 4:4-6; Colossians 1:15-19; 2:9).

There is a possibility, even though highly unlikely, that it may exist other forms of life in our material universe, similar to ours and otherwise. But we must remain always aware, that it is not prophesied that they will ever make contact with us in this life, or otherwise interfere with our existence.

We must remember that if they are evil, they must be treated like any other danger we encounter in this world.

However, this is unlikely, for by all Scriptural references, it seems that God created this material universe we live in as our backyard, to be populated after the New Earth. Certainly, God has plenty of room in the emptiness to make a universe for each living creature he has made or will ever make, and we know he does things in orderly manner.

GOD is in charge of every corner of creation, of all universes and dimensions, and nothing absolutely happens outside his permission. And we know that he loves us and is with us, until the end of days (Matthew 28:20).