WHO ARE THE 24 ELDERS OF REVELATION? 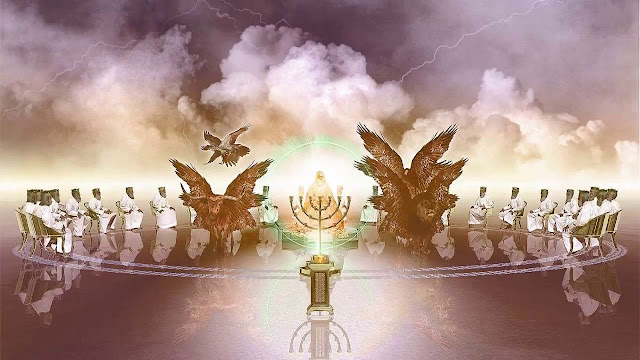 WHO ARE THE 24 ELDERS OF REVELATION?

The Bible does not give the identity of these men, or specifies whether they are real or just a symbolic vision. However, using the brief description of them, we can unravel their identity to a degree.

This hypothesis teaches that the 24 Elders are angelic beings, as the four creatures around the Throne of God.

However, the 24 Elders seem to have three characteristics proper to humans and not angels.

They are old, which represent linear time. Angels are timeless and are made as they always exist, they never age.

They reign in Glory, which is a dignity given to humans and never to angels

The possibility that they are angels is less than if they were glorified humans, even if they were immaterial. Humans and angles do not share the same nature, function or future.

Other hypothesis says that the 24 Elders are symbolic representation of the whole glorified Church.

They claim that because the order of priests serving in the Temple were of 24 groups (1Chronicles 24:1, 7-19), these 24 Elders are a symbolic representation of the whole community of the saved, who worship God as Kings and Priests (Revelation 20:6).

This is possible, save two important factors.

It restricts the view of the Church to a single group, that overlooks the mention of Israel as a nation. It is true that the saved Israel will be part of the Church of Jesus, since no salvation can be achieved outside the Lamb of God, but it seems unlikely to avoid all mention of Israel as part of this community of the saved when the same book mentions them by name in Revelation 7:4-8.

It adds a symbolic nature to the image of the 24 Elders without any reason for it. Even though this is possible, it is not recommendable to give a biblical narrative a genre without or against biblical basis. In the eyes of John who describes the vision, these elders are real and not non-existent as it would be the case if they were simply a symbolic vision. But even if they were, as they are part of a bigger vision, then the four living creatures and the Throne of God will be also symbolic.

Even though this is possible, it remains a hypothesis since no internal ground can be establish for such a claim.

This idea teaches that only certain individuals will achieve such status as to occupy the 24 thrones around God’s Throne in Glory. They claim these positions will be taken either by those who will die as a consequence of the persecution of the Great Tribulation (Revelation 20:4), or by special martyrs selected through history.

This is possible, even though it gives a vague identity of the Elders, or gives no explanation of why there are only 24 and not more or less of them.

There is other theory that contains some aspects of these hypotheses but from a different angle.

2 - These Elders rule with Christ, depicted by the type of crowns they possess (στεφάνους) which are reserved for those who overcome the world and tribulation to the end.

3 - They wear with garments of holiness (Revelation 7:14) washed by the blood of Lord Jesus, which indicate they belong to the human race, and are not a vision neither created in glory away from Adam’s lineage.

4 – The Twelve Apostles of Jesus were promised thrones in Heaven next to their Master and Savior, next to the Father

5 – Even though salvation of all humans in ONLY through submission to JESUS as Lord and Savior; Israel still counts with a special mention in the Plan of Salvation which derives from the promises God made to Abraham and his descendants forever (Romans 11:25-26). As such they are recognized under their own identity in Christ in the same book of Revelation (Revelation 7:4-8) with honor (Revelation 21:9-14) as participants of this salvation.

Considering all of these details, and the fact that the Twelve Apostles themselves were all Jews, we can safely assume that Israel is considered worthy to be mentioned, and that is indeed recognizable in the persons of the Elders as inheritors of salvation in Christ.

The Twelve Apostles of Lord Jesus and the Twelve Patriarchs of Israel, represent the People of God through human history, and the two Dispensations, Mosaic and Christian.

It is only just, as the Scripture lets us see, that the two groups should occupy the 24 thrones in Glory before God, which proclaim for eternity the triumph of God in human history. Nothing of his plan was frustrated, none was lost.

We can safely say that there is a high probability, that the 24 Elders of Revelation 4, are indeed the Twelve Apostles, and the Twelve Patriarchs, in their future state of Glory, representing the whole People of God, through the heads of the two alliances God had with humanity, now redeemed in Jesus forever, represented by their garments washed in the blood of Jesus and their crowns of kingship emanating from God.

The vision is not symbolic, but a futuristic view of John himself glorified, together with the other Apostles, and the Patriarchs in Glory