THOSE WHO WILL NEVER DIE 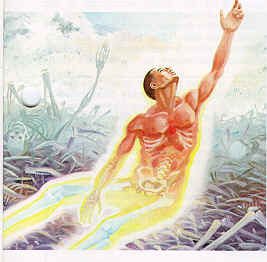 THOSE WHO WILL NEVER DIE

St Paul explains in his first letter to the Corinthians:

Christianity has always taught that there will be a resurrection of the dead. Even though most believe in one single resurrection, the Bible speaks of two different lots of them. A first resurrection for the justified, and a second resurrection for judgement for those who have not died justified by the blood of Jesus Christ (Revelation 20:6, 13).

And this idea of a partial resurrection for the saints, has at the same time obscured the fact that many believers will never experience death, and simply changed from a natural human state, into a heavenly one, like the ones resurrected from the grave to eternal life.

However, as members of the adamic humanity, by virtue of the original sin, we are all liable to death. It is impossible to conceived that a human being could cheat death, as much as to think that a human could die twice.

Some modern theologians entertain the idea that mortality is a natural part of material creation, and that it happens anywhere in the universe, in all living creatures, and that death has nothing to do with sin. Adam’s or otherwise.

But fundamentalist Christians profess that GOD created at least humans, to be materially immortal, since the nature of death, as exposed in the Bible only relates to physical death, not spiritual necessarily:

“12Therefore, just as sin came into the world through one man, and death through sin, and so death spread to all men because all sinned— 13for sin indeed was in the world before the law was given, but sin is not counted where there is no law. 14Yet death reigned from Adam to Moses, …”

Given the context, it is clear that Paul is speaking about a recognizable issue, and not a relative or invisible one. The only ‘death’ he could be speaking of, given the circumstances, is physical death.

Furthermore, the author of Hebrews also follows the same theology, proving that that was the doctrine held by early Christians, by stating:

“Just as people are destined to die once, and after that to face judgment”

The idea that all men must as a consequence of the Original Sin suffer death, is one of the first doctrines of traditional Christianity. All other theories are later and innovations from the Biblical teaching.

Death is the payment we owe God from the sinfulness of our humanity, passed to us through Adam. At least, physical death if not spiritual. And that is exactly the reason why men must die only once and not twice. It is a doctrinal derivate to assume that none of the people resurrected by our Lord Jesus, like Lazarus; the son of the widow (Luke 7:14-15); or Jairo’s daughter (Mark 5:40-43), died again, since with one death, we have paid the cost of our physicality.

How can then the justified who will be alive at the return of the Lord will be changed into glory without death?

There are a few hypotheses on the subject, but what most probably will happen, is that the saved will literally die, but it will be only for a second, to then be transformed into glorified beings, after having paid their legal death sentence to our Heavenly Father.