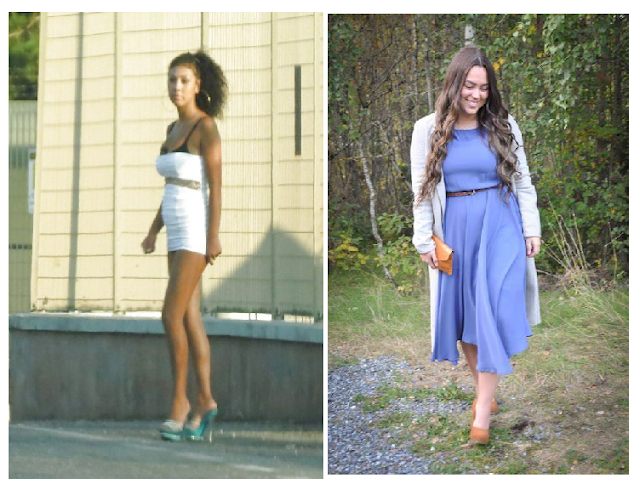 In modern times, women have become used to present themselves through social media in a provocative manner, in order to attract attention, and among them, even professing Christian women

Photos in tight and short dresses, revealing the contour of their bodies or even part of their flesh, mostly breast and tights, is seen every day from women that are supposed to be followers of Jesus.

It is hard to describe the term “provocative” to men and women. People’s perceptions vary according to culture and sex, and what it may seem suggestive to some, it may be normal to others. Nevertheless, there are certain aspects of decency that are still universal in most of the planet.

In our Western culture, breast and naked tights are erogenous zones. Men discuss about the size of breasts, legs and backsides of women, as well as other parts of their bodies, according to their preference. Some like them big, some small, but all enjoy a bared view of them, which awakes in them sexual desire.

Fashion designers are aware of this, and they design female clothing to induce sexual appeal, and some even get to reveal part of them to attract sales; bordering the sociable accepted standards within what is considered “decent” at the time. But the more depraved is a society, more nakedness is exposed.

Following this tendency, professing “Christian” women induced by this modern mentality, have started to display themselves in dresses with short cuts on their chest and their skirts, so that a significant part of their bodies are clearly visible. Others walk around with tight clothes that show the shape of their bodies, giving the impression of being naked. Finally, others just wear so little clothes, that are almost non-existent.

Even though women do all these things with an obvious intention of attracting male attention, which is naturally inbuilt in their womanhood, it is done beyond of what is expected.

Women appreciate men showing signs of approval to their immorality, even when they may not be aware of it, and guided by these reactions, they keep doing it.

What they ignore, is that men approve this behaviour, not because they look ‘good’ or ‘attractive’, but because they are immoral and contemplate them as “sexual objects”, and not as human beings.

Millions of men assist daily to adult houses and strip parlours, spending thousands of dollars propelling the industry of Satan, without paying attention to the personal reality of each woman they visit, and without realizing it, the money they spend helps to continue this evil industry.

They may speak nicely to their favourite courtesan, and flood her with presents and cash; and indeed, these women may feel appreciated, but that is a fallacy. In reality, no man wants to see their mother, wife or daughter as a courtesan or stripper, and certainly, they would not marry one. They only clap and give cheers of approval to the sexual arousal each woman gives them, but they do not want to seal their lives to any of them. The only men these women may find as partners, are not really men, but ‘parasites’ who have lost all dignity and are looking to live from them.

Christian women who flirting with this kind of behaviour in everyday life, they may not work as strippers or sex workers, but certainly are using the same method to attract male attention to a different degree, sexual arousal. They disgrace the name of Christ and lead other humans to sinfulness with this conduct; and will have to answer before God for it.

Women who follow this path, not only present themselves to the condemnation of society in general, but have destroyed their Christian testimony; and become shameful to other men and women; but not only that, they are condemned by their own children. Their offspring will feel ashamed of them when they arrive to age of sexual knowledge and are confronted with this gruesome reality.

Some have argued in the past, saying that no one has the authority to determine what is “immoral”, since morality changes with the times. That is correct, but in Christianity, we do not judge morality according to social standards, but according to the Scripture. And the Bible gives clear guidance on perfect morality.

The Apostles, after calling men and women to practice modesty and simplicity, recall the women of the Old Testament as examples of proper behaviour (1Peter 3:3-5). This was done by Peter, quoting Sarah, Abraham’s wife as example, who exited around 2500 years before his time, as an example to women of his day.

Many will argue this point, but one thing is certain, in our culture today, exposing breasts, legs and backsides, it is considered NOT an act of modesty, but an immorality, proper of lose women.

Christian women, you were redeemed by the Holy Blood of our Lord Jesus Christ, and you were sealed with the Holy Spirit as God property. Act like it. Honour Christ with modest behaviour. You can still be feminine, and attract the opposite sex with proper modest conduct, because modesty does not cancel femineity.

The beauty of a woman is noted in her clean behaviour, wearing clothes that let a man imagine the beautiful shape inside them. And in the confidence to know that they are women of only one partner. In the beauty of their innocence and delicate manners. This inspires the respect and appreciation of men of good conduct. Men that are good to partner with and know how to sustain their families.

But if you dishonour your person by exhibiting your body as meat in the market place, you will attract the attention of immoral men, men who are not good to be partnered to, men who waste their money not on their wives and children, but on adultery and fornication, always in debt; while falling into the disrespect of men of good standing, who will keep you away as something shameful and not worthy to imitate, from the women they truly love

Christian woman remember that the Name of Jesus is worn around your shoulders. Do not be the cause of sinfulness for anyone. Do not be a destroyer of families. Do not make the name of Jesus be blasphemed by your behaviour.

Because we all will be judged according to our actions, sooner than later.

“Likewise, I want the women to adorn themselves with respectable apparel, with modesty, and with self-control, not with braided hair or gold or pearls or expensive clothes, but with good deeds, as is proper for women who profess to worship God.”