JESUS HAS WORDS OF ETERNAL LIFE 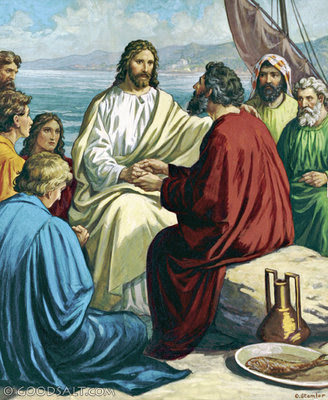 JESUS HAS THE WORDS OF ETERNAL LIFE

60When many of his disciples heard it, they said, “This is a hard saying; who can listen to it?”

61But Jesus, knowing in himself that his disciples were grumbling about this, said to them,

“Do you take offense at this?

62Then what if you were to see the Son of Man ascending to where he was before?

63It is the Spirit who gives life; the flesh is no help at all. The words that I have spoken to you are spirit and life.

64But there are some of you who do not believe.” (For Jesus knew from the beginning who those were who did not believe, and who it was who would betray him.)

“This is why I told you that no one can come to me unless it is granted him by the Father.”

66After this many of his disciples turned back and no longer walked with him.

67So Jesus said to the twelve,

68Simon Peter answered him, “Lord, to whom shall we go?

You have the words of eternal life, 69and we have believed, and have come to know, that you are the Holy One of God.”

Lord Jesus had just spoken to the Jews that followed him from the eastern shore of Galilee, and explained to them the necessity of receiving him as Lord and Savior since he was the ‘Bread from Heaven’, that had been given by God for eternal life (v.58).

The Jews understood this as an invitation to cannibalism, and departed from him.

However, Jesus returned to the ones who were supposed to be his ‘real’ followers who must have also shown concern, and asked them why they were uncomfortable. Jesus explained that he had spoken symbolically, in spiritual terms (v.63), since the eating of a material thing would not do the job. Jesus was clear that he never meant a meal at all, but that he had used a symbolic language to communicate a spiritual truth, to come to faith in him and acceptance of his Lordship (v.40) for eternal life.

Many of his regular followers were not able to comprehend his words, so also abandoned Jesus the same as the other Jews (v.66). To this, Jesus said for a third time, making emphasis in this doctrine of the Sovereignty of God. That nobody can come to believe in Him unless the Father allows it.

We have spoken before how God wants all men to come to salvation in Jesus, and how he provides a common grace to all men to be able to make a clean decision. In this case, these men had believed in Jesus, but at this point they were not able to understand the symbolic meaning of his graphic words, and deserted him.

God also has the power to decide when the time is up for every person. Normally as a rule we assume a person has his whole life to decide whether to follow Lord Jesus or not. To most people on Earth that is so. But to certain people depending of the level of revelation and grace they have tasted; this period of time can vary.

It is not the same level of Grace and knowledge of God the angels that fell had in comparison with humans, and that is why they have no opportunity of redemption. They had knowledge of God; we have faith in God.

And among men, it is not the same level of grace and knowledge of God one of the Twelve apostles had, or one of the 70’s, or even one who spoke to Lord Jesus face to face, than someone today.

These men had followed Jesus and confessed to be believers in him. They had seen his miracles, seen the lepers heal, the blind recover their sight, and the dead resurrect. And they had heard first hand his teachings.

However, the hardness of their hearts remained, because they were attached to material things more than to the Spirit. They benefited from the Lord’s miracles and expected of Jesus something else, of more material nature, the same as Judas Iscariot did, so they failed to understand the spiritual meaning of our Lord’s words and departed him. In this case, the Spirit of God had stopped bringing them to Jesus, and they had just sealed their final destiny. They had abandoned Christ. They had committed apostasy, the worse of all sins in creation.

This does not mean that no apostate can revert to faith. Each apostate has different level of guilt than another, but GOD knows their hearts. To some God will grant mercy, and others will never repent and are considered to have defaulted the Holy Spirit, our Lord, and repentance will never come to them.

Dishearten by this reaction, Jesus asked his closest companions, the twelve, if they also wanted to leave him. But strong Peter, the Prince of the Apostles, with conviction said:

Declaring that Jesus was the way to salvation, and having believed in him, now they ‘knew’ (ἐγνώκαμεν- have come to know), that Jesus was who he said he was, the Messiah. The Son of God.