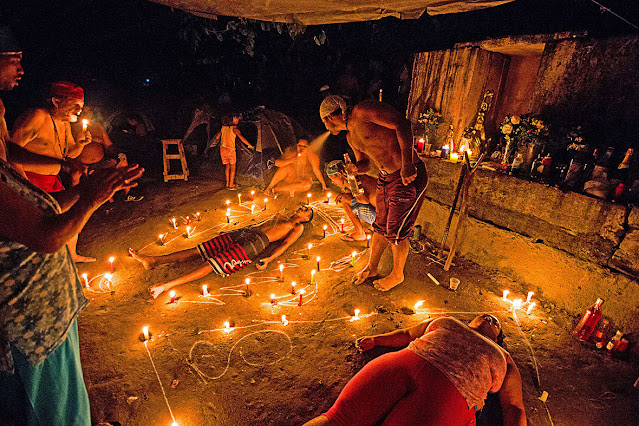 Witchcraft, is the methodical practice of achieving supernatural events, through casting of spells, enchantments and curses, either for evil purposes or for the personal benefit of the practitioner. It is also called ‘Magic’, or simply the ‘craft’ for their practitioners.

Witchcraft is an old universal practice, which takes different forms in different continents, and even enjoys the status of religion in certain parts under different names, like Voodoo, Wicca, Divination, Astrology or Occultism, especially in primitive groups of Africa, Asia and indigenous America.

Witchcraft can be dated back to the beginnings of humanity, since it involves the attempt of humans to reach the invisible world under their own efforts; and it has survived up to this day, even in modern Western countries due to their reputed effectiveness in the lives of those who relay on it.

However, in modern times, specially in first world countries of vast European composition, to believe in the effectiveness of Witchcraft or Magic is considered by most to be superstitious and fantastic, more for movies and child horror stories.

But is that true? What does the Bible teach about it?

WITCHCRAFT IN THE BIBLE

The OT uses the term כָּשַׁף (kashaph), which is usually translated as ‘witch’ or ‘sorcerer’, but their work is the same, selling their ‘craft’ for money for whatever purpose the payer requests.

Exodus 22:18, GOD demands the execution of them, and in Deuteronomy 18:10-12; GOD again forbids the practice or tolerance of the practice among the Jews, claiming that this is an abomination to God, and that that is the reason now the pagans are taken away from wherever the Jews go and settle:

“10There shall not be found among you anyone who burns his son or his daughter as an offering, anyone who practices divination or tells fortunes or interprets omens, or a sorcerer 11or a charmer or a medium or a necromancer or one who inquires of the dead, 12for whoever does these things is an abomination to the YHWH. And because of these abominations YHWH your God is driving them out before you.”

The same attitude continues over the NT period, where we are told about Simon the Magician, to whom Peter told that ‘You have neither part not lot on this matter, because your heart is not righteous; (Acts 8:9, 21). Even though Simon had been a magician and had repented, and this condemnation was about his attitude in regards with the giving of the Holy Spirit, and not with magic, the tone of the Scripture pre-supposes the old condemnatory tone of the Law in regards to this ‘craft’. This is further proved when more than 50,000 drachmas (Over 50,000 dollars) in sorcery books and scrolls of magic were burned when the Ephesians accepted the gospel (Acts 19:19).

On another occasion, Paul condemned Elymas, a sorcerer, considered to be a ‘prophet’ by the Jews at Cyprus, who oppose them; and a slave girl possessed by an ‘spirit of divination’ who left her after Paul expelled the evil spirit out her in the Name of Jesus (Acts 16:16-18).

In reality, there is no magic in the universe. Every created thing, material or spiritual, is finite in power as in circumscription. Very much like we humans are.

Witchcraft tries to affect the material world we live in, by recurring to the intervention of evil spirits who also don’t have ‘magical’ powers, but move in areas beyond human perception.

In case of fortune telling, evil spirits with a better view of linear time, can guess an outcome and they tell this to the divinatory, who seems to know the unknown.

In case of love spells, evil spirits influence, but not control, the feelings of the victim, in favor of the payer, at the request of the witch, who seems to get the credit of the whole process.

In case of black magic, evil spirits commit murder, either directly or through a material agent, human or animal, at the request of the warlock, who seems to take the credit of the whole thing without even being near the victim.

Witchcraft is effective, whether people believe in it or not, and it is not ‘magical’ at all. It has always a mechanical reality in the spirit world, and it is better to be aware of it than to ignore it or dismiss it.

Because of the reality of spiritual dark forces in place, Witchcraft is effective in his aims and is not a superstition. It is real, but it is not perfect. A few times it fails, as dark forces are not perfect either, and if the action or information is wrong, they human agent (Witch or Warlock, or Magus) will also fail in his attempt.

The Bible narrates the story of Balaam, the ancient magician who worked for Balak, the King of Moab, who was summon to cast a spell no Israel to stop them winning the combat against the Moabites as they had already been winning in towns around them (Numbers 22:1-3).

The warlock Balaam was sought for because he had a reputation of being effective, and therefore, Balak the King, offered him a great deal of money for this curse on Israel but Balaam refused him (Numbers 22:18). And the reason he gave is a great lesson about God’s power over Satan:

“For there is no spell against Jacob and no divination against Israel. It will now be said of Jacob and Israel, ‘What great things God has done!’”

NOTHING, good or bad happens against the will of God.

Witchcraft is real and effective but only over those men who live outside God’s realm. The pagans, the worldly, the unconverted. But NEVER against the Children of God.

God protects his people, those who have been born again from water and the Spirit, and remain faithful to Him. Over such humans, men, women and children, Satan has no power, and as a consequence, no witch or warlock or any spell or curse at all. Nothing can touch the ones loved by God.

Whenever we encounter ourselves against any dark move, we must pray to God in the Name of our Lord JESUS CHRIST, and seek refuge under his almighty protection, and dissipate all fear and concern. Lord JESUS is powerful to stop any magical spell or ‘work’ done on us, and dissipate any demonic attack or influence, which will come back to the people who made the attempt against us.

“GOD disarmed the rulers and authorities and put them to open shame, by triumphing over them in JESUS”