INSTITUTIONAL CHRISTIANITY AND THE END OF TIMES 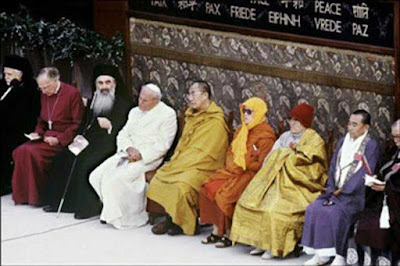 INSTITUTIONAL CHRISTIANITY AND THE END OF TIMES

For years I have wondered what it will happen with established churches when the time of the Antichrist comes.

In 40 years of Christianity, where I developed from Roman Catholicism, where I was born; into Anglicanism, a traditional form of Reformed Christianity; to finally, after seven years of formal Theological studies and a Masters in that discipline, ended up as a true Evangelical; it is natural that I have considered many different opinions on the subject.

However, even though I considered all these theories, I never accepted any of them.

I have always believed, from the beginning, that the Scripture speaks of a human being, who will grow in political and economic power, to the point to impose himself over the world’s politics and religion. The ‘Man of Lawlessness’ or ‘Son of Destruction’, or ‘Beast of the Sea’, as the Bible names him (2Thessalonians 2:3; Revelation 13:1-4)

It is clear also, that he will dominate world religion, with the help of an ally, whom the Scripture calls ‘The False Prophet’ or ‘Second Beast’ (Revelation 13:11-14; 19:20).

But whether we think this Beast is an institution, a social system, or a person; we all agree that it will persecute Christians and opponents to its rule. And this is also whether we believe in a sudden secret rapture or that the Church will remain through the Tribulation, since we all agree there will be people of faith during the persecution; the ones ‘left behind’ or a chosen remanent of believers.

So the question arises again, what will happen with institutional Christianity during this period of time?

Where is the place of the Roman Church, Anglicans, Lutherans, Presbyterians, Methodist, Uniting Church and any other minor evangelical independent congregation during this time?

Even if we consider that we will be raptured into Heaven and this is not our concern, it is the concern of the ones left on Earth, according to the ‘Secret Rapture’ believers; and even more for the ones like me, who believe that the Church will remain through the Tribulation (Matthew 24:9-14).

If the False Prophet will oblige the whole planet to submit to the Antichrist, through deceiving speech and false tricks passing as ‘godly miracles’ (Revelation 13:12-15), embarking in an obvious moral and religious control, it is only logical to think that he will be able to exercise control over all of the world’s faiths, or at least, over a significant part of them.

If this is the case, what will be the role of the Christian churches during this time?

If the Second Beast can control the faith of the world, there can only be two possibilities for the future.  Either the whole Christian Church will be persecuted for opposing the Beast, having her buildings and materials goods confiscated; or they will submit to the False Prophet. There is no other possibility.

In both cases, there will be a remnant faithful to God, Jesus, the Spirit and the Gospel who will suffer persecution (Matthew 24:13; Daniel 7:25; Revelation 12:17); but whatever the case, institutional religion will end.

Christian temples and worship, as we know them, will be proscribed or submitted to the Antichrist.

But from these two perspectives, the second one is the worst.

If institutional Christianity becomes extinct, we should not worry much, since we will carry our religion to wherever we go. But if it becomes corrupted, then it turns into a darker option.

In a corrupted condition, the established Christian churches will remain open, with the same buildings and institutions we know now.

Catholics, Orthodox, Protestants and Evangelicals, as well as other non-Christian groups, will look exactly as they look today; but they all will be in communion between themselves and all with the Antichrist, through the guidance of the False Prophet (Revelation 13:13-17). They will look genuine, but in truth, they all, without exception, will have become the ‘Synagogue of Satan’ (Revelation 2:9).

There are many theories about these events, and many lean towards one side or the other, but this is a matter of serious and calm consideration.

If you believe there won’t be a tribulation, because you think the ‘Antichrist’ is a dead roman emperor; or that you will be raptured to Heaven, then you may not have to worry. BUT if that is not the case, then, we all need to worry.

The sight of a dead and false Christianity starts to be seen now.

The Gospel has been betrayed for homosexuality, abortions, female control, fear to government and mass sicknesses, immorality and relativism.

Scriptures are not anymore the ultimate rule of Faith, but our own reason and the public opinion.

We have ‘discovered’ that distant electronic worship is acceptable, and that it is more comfortable to worship from a couch at home, than having physical communion with other Christians and offer God a proper worship.

We have discovered that our ‘strong faith’, was not so strong, since we put our trust in masks and man-made medicine instead of God’s power to protect us. We made millions of excuses, but the fact is one. With our actions, we said ‘God cannot save us from this virus, but medicine can’.

All the conditions are given for the submission to the Beast.

The time will come when in all Christian Churches, Catholic and Protestant will abandon Jesus of Nazareth as the only savior, and take him only as one of many spiritual gurus.

The time is coming, when all religions in the world, including Christianity; that is institutional Christianity, will be a home of demons and deceit (Revelation 18:2)

But GOD will keep a remnant faithful to the end.

And we must be prevented before it happens.