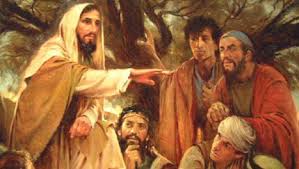 7And he called the twelve and began to send them out two by two, and gave them authority over the unclean spirits.

8He charged them to take nothing for their journey except a staff—no bread, no bag, no money in their belts— 9but to wear sandals and not put on two tunics.

“Whenever you enter a house, stay there until you depart from there. 11And if any place will not receive you and they will not listen to you, when you leave, shake off the dust that is on your feet as a testimony against them.”

12So they went out and proclaimed that people should repent.

13And they cast out many demons and anointed with oil many who were sick and healed them.

After Lord Jesus was rejected in his home town of Nazareth, He send his Twelve closest disciples, later on called ‘Apostles’, to preach the Gospel all over Galilee and nearby areas to the Jews, calling them to repentance.

This was an important period of preparation for all of them.

By disseminating his disciples, Jesus got to cover more area in a lesser time; but also, it was a crucial time for the twelve disciples. They had seen Jesus curing grave sicknesses and resurrecting the dead. They had seen Him curing the woman suffering of blood loss, paralytics, and leppers. They had seen with their own eyes the power of this man who claimed to be the Messiah, the Son of God. Now, they will learn to depend on Him at a distance.

When Jesus sent them, He made a point of no taking with them nothing that could indicate preparation in sustainability, so much in food as in clothing. When He specified that to them, implicitly, Jesus took the responsibility of them, to provide them with everything they needed to survive, so they will taste the power of Jesus, and his divine authority.

In his Wisdom, the Master, sent them in twos, not one by one, not only because that was the minimum number of witnesses to give testimony about anything in Jewish culture, but because He knew the devil, and how he whispers to the ears of men when they feel weak and alone, like he did with Jesus in the desert. Jesus knew that one will support another, and together they will remain faithful even if they were far from their teacher.

He also did not deny Judas Iscariot, the traitor, this blessing. Jesus knew from the beginning he will betray Him (John 6:70), nevertheless, He was also given the authority of performing God’s service while he was pure. He had a fair go. And by the condemnation of those who Jesus said, would reject them (v.11), Judas knew that sin is punished. The blessing of that day, became later because of his corrupted heart, a curse to him.

Finally, Jesus sent them to proclaim Repentance and Faith in his Name, followed by all kinds of signs, including the open testimony in their own lives of the divine providence over them.

The people and they themselves, came to know that Lord God YHWH, the God of Israel, was with Jesus, and that He was the Messiah they were expecting, almighty and merciful.