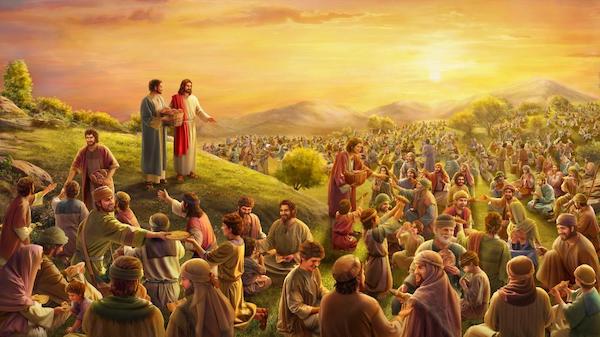 1After this Jesus went away to the other side of the Sea of Galilee, which is the Sea of Tiberias. 2And a large crowd was following him, because they saw the signs that he was doing on the sick.

3Jesus went up on the mountain, and there he sat down with his disciples. 4Now the Passover, the feast of the Jews, was at hand. 5Lifting up his eyes, then, and seeing that a large crowd was coming toward him, Jesus said to Philip,

“Where are we to buy bread, so that these people may eat?”

6He said this to test him, for he himself knew what he would do.

“Two hundred denarii worth of bread would not be enough for each of them to get a little.”

8One of his disciples, Andrew, Simon Peter’s brother, said to him,

9“There is a boy here who has five barley loaves and two fish, but what are they for so many?”

“Have the people sit down.”

Now there was much grass in the place. So, the men sat down, about five thousand in number.

11Jesus then took the loaves, and when he had given thanks, he distributed them to those who were seated. So also, the fish, as much as they wanted.

12And when they had eaten their fill, he told his disciples,

“Gather up the leftover fragments, that nothing may be lost.”

13So they gathered them up and filled twelve baskets with fragments from the five barley loaves left by those who had eaten.

14When the people saw the sign that he had done, they said,

“This is indeed the Prophet who is to come into the world!”

15Perceiving then that they were about to come and take him by force to make him king, Jesus withdrew again to the mountain by himself.

These people had followed Jesus to his planned retreat with his disciples who had just come back from their first missionary trip, but it proved to be hard to scape the masses who followed the Lord, because they needed Him (Mark 6:30-32). Jesus received them not because He could not be away from them (John 6:15), but because He felt mercy towards them (Mark 6:34).

There were many there. Some who believed in Him, as He Himself said He was, the Messiah and Son of God. There were others who thought He was just another Prophet. Other did not pay attention of who He was, but they knew He had power from God, and mostly these, they followed Him for his miracles. And some others they did not have a fixed opinion of Him, and they followed Him out of curiosity. But all of them they needed Jesus.

After teaching them the way to God, our Lord knew that they were hungry and far away from any town, so to prove his disciples’ maturity in the faith, He asked what they could buy with the 200 Denarii they had in their money bag (Approx. US$150-200). Jesus knew the place was far, and that 200 Denarius could not cover the food of 5000 people.

The apostles responded that that was not enough and that the place was far from any town for them to go and eat (John 6:7; Mark 6:35-36). They did not give thought of the ability of Lord Jesus to feed them all from the rocks if He wanted. So, Jesus took the conversation and said for them to feed them (Mark 6:37), and they found a boy there present who had five loafs of bread and two fish, probably for sale, or for his own family. Jesus blessed the food, giving thanks to the Father for his providence, not like a human does, but as his only Son who knew that all that was going to happen even before He was born.

Through this, Jesus demonstrated his own disciples, the only ones who seemed to have known about the miracle, that He had power over nature and that He was totally reliable, and therefore, worthy of our trust once again, in the three years of schooling they enjoyed with the Lord.

When He ordered the left overs to be collected, they filled twelve baskets of bread, left after feeding them, and seems that the story sparked and they realized that Jesus had performed such a miracle. Jesus had fed them from nothing, and they marveled of his power and thought that nobody else than Him could cover the place of the promised King of Israel, and so they ran towards Him to name Him King.

Jesus moved away, because He had not come to create an earthly kingdom, even though He could have; but because He had come to save us from our sins, through his vicarious atonement.

Jesus had the power they accused Him for. He could have proclaimed Himself successor of David and conquer not only the whole of ancient Israel, but the world entirely.  He could have stopped his crucifixion, but He knew his call was unique and that nobody else could save us. And because He loved us, He continued with the Plan of Salvation, out of his own free will.

Glory to You Great Lord JESUS-CHRIST.