ABOUT ANGELS, HUMANS AND SEXUAL GENDER 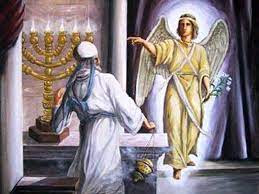 ABOUT ANGELS, HUMANS AND SEXUAL GENDER

Popular belief, based partly in traditional and biblical narratives, sustain the idea of sexes in angelic bodies, where most tend to think of angels as male, and if they ever think of a ‘female’ angelic figure, is normally related to evil angels, or demons, who in feminine disguise, appears in an attractive female form to make male humans deviate from God’s will.

But do angels really have sexual identity?

A disembodied human spirit cannot be really considered a full ‘human’, since the spiritual memory any individual, outside of the body has, like when it happens after death and before the resurrection, will conserve only material memories of his life on the physical world. That is the only way we can conceive our habitat, and that is why when we dream, even though it is a spiritual experience, we always dream like if we are in the physical realm. We humans, even though we have a spirit that gives life to our bodies, we are not fully existent unless we are united to our own physical dimension and feed on physical experiences, since that is the only type of existence that we were created for.

Part of our humanity is procreation, through sexual intercourse, through interconnection of genitalia.

The rest of the material creation, have different forms of reproduction, not necessarily through inter-relational sexual encounters. Plants procreate through ‘pollination’ without bodily intermingling. Other simpler animals are hermaphrodites, and some others have intercourse in different manners than mammals.

In order to fulfill this, the males have been given a sexual organ that makes possible the introducing of the organ into the female recipient part, and from there, human life will spring and grow, until it becomes a full human being.

Without these specific organs, in shape and quality, reproduction would be impossible and humanity will become non-existent. And humans are separated according to these sexual functions, that hold a bigger, more complex reality behind their sexual identity, into Men (Planters) and Women (Receivers). There is nothing in between. Since birth they are what they are, men or women, and nothing else, in their natural condition.

What we call ‘angels’, who in Scripture are called ἄγγελος (NT) or מַלְאַךְ (OT), are created beings, that serve God as Messengers. That is their function, as far as we are concern. They do other things, like singing for God (Isaiah 6:2; Psalm 148:2), and worshipping (Luke 2:13-14; Revelation 5:11-13), but they do that without us.

Lord Jesus said that they do not reproduce (Mark 12:25). So, they do not need sexual organs at all.

How then is their gender identified as ‘male’ or ‘female’ since they are totally immaterial?

How can these immaterial spirits be called ‘males’ if they are unable to reproduce and do not have physical bodies?

Men, Women and Angels, and all the intelligent creation have a common denominator, which is called ‘Spirit’.

The Spirit (רוּחַ) or πνεῦμα, is the life force that animates the whole of creation. That is the energy that makes our material bodies have an intelligent life, and that in their union with matter, in the case of humans, becomes a ‘living soul’ (נֶפֶשׁ), or a Personality.

This personality is what really defines our identity for eternity, since it what we really are or become, and it does not change with death or glory, except with our own consent. That is the center of our ego and self, commonly known as psyche, and where our free will resides.

It is there also where our personal characteristics take place. Our love, pride, hate, resentment, mercy, creativeness, and intelligence live. And in some, these characteristics resemble more the attributes we commonly give to men, as well as the ones we attribute to women. And so, it is in the Angels.

Humans and Angels have of male and female attributes, which is also reflected in the material bodies of humans. In our physical bodies we have Testosterone and Progesterone, both, males and females, but it is the different amount of them, what makes us into ‘males’ or ‘females’, in union with our physical genitalia and body constitution, in our natural state.

In the case of Angels, they usually appear as men, not because they ‘are’ men, but because the conglomerate of spiritual personal characteristics see themselves represented better into that sexual identity we conceive as males.

Can Angels appear as woman as well? Of course, they can, and also as animals, or any other creature they desire, for a moment, not permanently, because it is one of their attributes (Matthew 3:16; Mark 1:10). But it seems to be the male the best representative among human gender, of their ‘personal’ spiritual constitution, and that is why they do it.