WHY GOD CREATED THE PLANETS 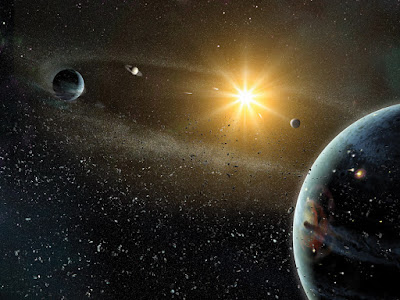 WHY GOD CREATED THE PLANETS

In the Bible we have written that God created ‘Heavens and Earth’ - השמים ואת הארץ (Gn 1:1).

The Scripture states that this happened ‘in the beginning’ – בראשית, clarifying thus, that before this act of creation, there was no other creation before it, at least in the same terms the audience of the narrative (Humanity) can relate to, meaning the physical world as we know it on Earth.

Then it proceeds to recount this process step by step, where the Sun, Moon and the Stars are mentioned (Gn 1:16; Ps 8:3; Dt 4:19) implying that they were part of this material creation, with the whole narrative centered in relation to the planet Earth and humanity (Gn 1:14). In simple words, God created the whole of the material world for the benefit of Humanity.

With humanity’s fall into sinfulness, apostle Paul tells us that the whole of this creation also was subjected to corruption:

“For the creation was subjected to futility, not willingly, but because of him who subjected it, in hope that the creation itself will be set free from its bondage to corruption and obtain the freedom of the glory of the children of God.”

In this verse, ‘creation’ is the whole material realm, including Earth, Solar system, stars and planets. The whole of creation subjected to measure and limit of its mass, where decay and death are dominant.

This means that the consequences of Adam’s fall, affected also the Sun, Moon and stars, including the dead planets of outer space, which wait in a sense, for the Day of Redemption, where the Children of God will be crowned, and together with them the whole of the material universe, even beyond our planet, will be renewed to a glorified state:

“But the day of the Lord will come like a thief, and then the heavens will pass away with a roar, and the heavenly bodies will be burned up and dissolved, and the earth and the works that are done on it will be exposed …

… waiting for and hastening the coming of the day of God, because of which the heavens will be set on fire and dissolved, and the heavenly bodies will melt as they burn! But according to his promise we are waiting for new heavens and a new earth in which righteousness dwells.”

If we know that God never does anything without a purpose, either spiritually or physically (Col 1:16), it would be impossible to think that He bothered to make planets from all sizes and at different distances to just exist, without any purpose at all, or even to simply ‘glorify’ his Name as some say, because 99% of them are beyond our perception and give no glory to God since there is no one to glorify Him for them since we cannot see them.

Planets are not stars. They don’t burn, and have gravity to certain levels, and given certain conditions, like water and oxygen, they could be fit for life. But at the moment they are not.

The only conclusion is that if they do not yet fulfill any purpose, their reason to be is still pending. And the only time awaiting that will change radically the whole universe, is the day of redemption after the Last Judgement.

If we consider that all humans that ever existed will be resurrected physically (Rev 20:13), the most probable reason why God created the planets is to regenerate them and make them fit and blessed for millions of redeemed human beings that will come back to eternal life after the Great Judgement Day.

“He has made known to us the mystery of His will according to His good pleasure, which He purposed in Christ, as a plan for the fullness of time, to bring all things in heaven and on earth together in Christ.”