THE WOMAN WHO DRIED JESUS'S FEET 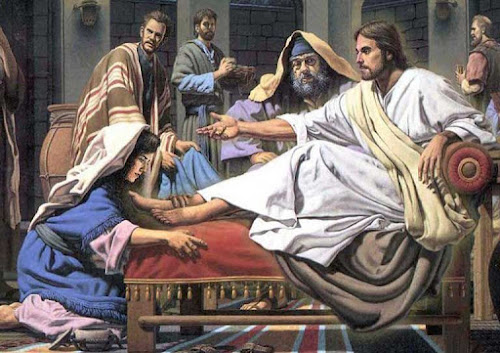 THE WOMAN WHO DRIED JESUS FEET WITH HER HAIR

The story of a woman who anointed Jesus with an expensive perfume is well known by Christians. What is disputed, is the identity of this lady, who is mentioned in the four gospels but with certain variants that have made scholars wonder whether these are all a same event, or two different ones are being described by the evangelists.

PLACE: In Matthew, Mark and John, the event takes in Bethany, on the south-east of Jerusalem.

Luke does not mention the place, but it is assumed to be Nain, on the North-West of Judah (Luke 7:11).

HOUSE: Matthew and Mark report the event at Simon ‘The Leper’’ house.

John does not specify.

PERSON: Matthew and Mark report ‘a woman’ as the one who anointed Jesus.

ACTIONS: Matthew and Mark said that ‘the woman’ poured the perfume on the Lord’s head.

Luke mentions that she cried, dried Jesus’s feet with her hair, and anointed Jesus on the feet.

John mentions that Mary anointed Jesus’s feet and cleaned with her hair.

Matthew, Mark and John object to the high price of perfume (A year’s wages), which instead should have been given to the poor.

Luke’s objection is the moral quality of the woman.

As an overall, the stories of Matthew and Mark are virtually the same in all detail.

John varies only in that it mentions the name of this woman, as being Mary, and that avoids mentioning the anointing of Jesus’s head; whoever, this could also could have happen, as was the current custom with honor guests, but John mentions the feet, as being an extra act of humility and submission to Jesus’s as Lord, more than just a guest. In other words, John’s narrative could also be the same as in Matthew and Mark, specially since it happened in Bethany, even though the house is not mentioned as in Matthew and Mark. All other details, including objections, are the same, with the addition that Judas is presented in John’s as the objector, who could be one of many.

The only other three details to observe is that Luke’s narrative is assumed to be in Nain, but in reality, the narrative of the event in this gospel is born without any obvious connection to Nain (See Luke 7:36), and it could be happening in Bethany.

The other detail is that in Luke’s the house is Simon ‘The Pharisee’, and not the ‘Leper’. Nevertheless, this Pharisee could have been a leper at some point and known because his social status. So, they could be the same Simon of Matthew and Mark.

John mentions no house owner, so here also Simon the ‘Leper Pharisee’ could also be the homeowner.

Everything may seem to indicate that this is one single story, specially since many details are the same, however, we still have Luke’s story, which does not mention a specific place, and gives a different lesson all together, but that by mentioning Simon ‘The Pharisee’ as the owner of that house, we could assume is still the same event under a different angle.

However, the person who performs the act, is called here a ‘sinful woman’.

If the story of the other narratives ends up being Mary, Lazarus’ sister, then we would be assuming Mary of Bethania as a possible prostitute, as Luke seems to say (Luke 7:37).

Even this could be considered, but what totally dismantles the assumption is the current word in Greek is a perfect indicative verb, as ‘being’ sinful, and not that she ‘was’ sinful (ἦν), as a current status, for which our Lord forgives her sins and tells her in consoling tone of voice: “Your faith as saved you, go in peace” (Luke 7:50), which does not concur with Jesus permanent attitude of mercy, always willing to forgive sins, but never to allow them (John 8:11), and which it would be totally incompatible with the friendship and believe these family (Mary, Martha and Lazarus) had with Jesus (John 11:5)

We can safely conclude that the narrative of this event in Luke 7:36-50, is a different place, in a different house and with different people, as the other three narratives. Most probably much earlier than the later episode with Mary, Lazarus’s sister, during the last days of Jesus’s ministry.