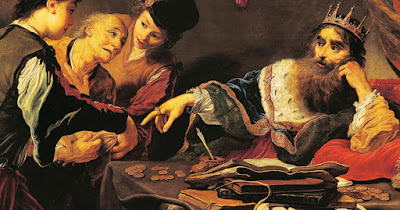 THE PARABLE OF THE UNFORGIVING SERVANT

21Then Peter came up and said to him, “Lord, how often will my brother sin against me, and I forgive him? As many as seven times?”

22Jesus said to him, “I do not say to you seven times, but seventy-seven times.

23“Therefore the kingdom of heaven may be compared to a king who wished to settle accounts with his servants.

24When he began to settle one was brought to him who owed him ten thousand talents. 25And since he could not pay, his master ordered him to be sold, with his wife and children and all that he had, and payment to be made. 26So the servant fell on his knees, imploring him, ‘Have patience with me, and I will pay you everything.’ 27And out of pity for him, the master of that servant released him and forgave him the debt.

28But when that same servant went out, he found one of his fellow servants who owed him a hundred denarii and seizing him, he began to choke him, saying, ‘Pay what you owe.’ 29So his fellow servant fell down and pleaded with him, ‘Have patience with me, and I will pay you.’ 30He refused and went and put him in prison until he should pay the debt.

32Then his master summoned him and said to him, ‘You wicked servant! I forgave you all that debt because you pleaded with me. 33And should not you have had mercy on your fellow servant, as I had mercy on you?’ 34And in anger his master delivered him to the jailers, until he should pay all his debt.

35So also my heavenly Father will do to every one of you, if you do not forgive your brother from your heart.”

After our Lord Jesus instructed his disciples of the manner of solving problems among themselves, either on a personal level or as a community, He also instructed them in the need of exercising mercy every time a fellow human showed repentance.

Through the parable of the unforgiving Servant, our Lord Jesus Christ showed us that every human owes to God and needs forgiveness of sins. Even the offences and evil acts done to us, it is an offence to God Himself, who demands total righteousness from all human beings, and is God who is ultimately affected by our actions. But also showed us that even though we are all liable to condemnation due to our ultimate debt to God, and God is willing to forgive us in his mercy to save us from our rightful punishment; we also should show mercy for every fellow human who has offended us, because in the forgiving of our sins, God is also forgiving the sins of others who repents, the same as us, in order to save us.

We all have a moral obligation to forgive offences from others done to us, regardless of the number of times they are committed; as God forgives us always every time we repent, without putting a limit to his own mercy.

The way we react to this divine mercy, show who we really are.

If any of us, remains unmerciful to others even after having received mercy from God, he or she is proving that they do not deserve God’s forgiveness either, and his hardened heart will be dealt in equal hard manner by the Supreme Judge of the Universe.