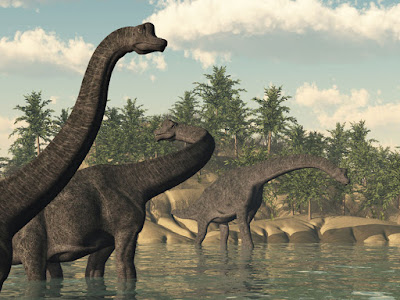 Frequently we hear this question since most people know that traditional Christianity rejects the theory of evolution. This however is a matter totally independent from evolutive theories, the same as the existence of all forms of lives that ever existed on the planet.

WHAT THE BIBLE SAYS

The Bible does not talk specifically about dinosaurs, but speaks that God is the creator of all living things on the planet (Gn 1:24-25; Ps 146:6), which included ‘Hatanninim’ ( התנינם ), which comes from the Hebrew ‘Tannin’ ( תני – Monsters )(Gn 1:21), which applies in Hebrew to all kind of animals who are fearsome, big and grotesque to any standards, even to primitive people, so much from land as from water or air.

The Scripture also speaks of Leviathan ( לויתן )(Job 41:1)and Behemot   ( בהמות )(Job 40:15), which even though it has been taken by some as being the Crocodile and the Hippopotamus, there is little probability these two animals existed in the Middle East around the time of Job, and furthermore, the characteristics given about both of them do not fit the description of these animals. Most probably they were not exactly dinosaurs, but certainly impressive beasts from sea and land who lived around those areas, passed the time of the dinosaurs, and that are extinct today.

According to the Bible, dinosaurs could have existed, and if they did, they were creation of God with a purpose; but they disappeared some time before or at the Great Flood.