PARABLE OF THE UNHAPPY SERVANTS 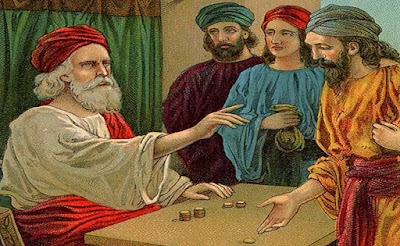 PARABLE OF THE DISCONTENT SERVANTS

1“For the kingdom of heaven is like a landowner who went out early in the morning to hire workers for his vineyard. 2He agreed to pay them a denarius a for the day and sent them into his vineyard.

3“About nine in the morning he went out and saw others standing in the marketplace doing nothing. 4He told them, ‘You also go and work in my vineyard, and I will pay you whatever is right.’ 5So they went.

“He went out again about noon and about three in the afternoon and did the same thing.

6About five in the afternoon he went out and found still others standing around. He asked them, ‘Why have you been standing here all day long doing nothing?’ 7 ‘Because no one has hired us,’ they answered. “He said to them, ‘You also go and work in my vineyard.’

8“When evening came, the owner of the vineyard said to his foreman, ‘Call the workers and pay them their wages, beginning with the last ones hired and going on to the first.’

11When they received it, they began to grumble against the landowner. 12‘These who were hired last worked only one hour,’ they said, ‘and you have made them equal to us who have borne the burden of the work and the heat of the day.’

13“But he answered one of them, ‘I am not being unfair to you, friend. Didn’t you agree to work for a denarius? 14Take your pay and go. I want to give the one who was hired last the same as I gave you. 15Don’t I have the right to do what I want with my own money? Or are you envious because I am generous?’

16“So the last will be first, and the first will be last.”

Jesus spoke this parable while He stayed on the Eastern shore of the Jordan, in Judea, before He entered Jerusalem (Mt 19:1), and it mentioned it after the incident with the rich young man who thought it was too much to leave his comfortable life to be a disciple of Jesus (Mt 19:21-23). In that occasion, Peter asked Jesus what will happened to them since they had left everything to follow Him, in contrast with the youth who preferred his money than being a disciple of the Lord.

Jesus promised that they will be rewarded for their decision, promising them hundred times more in this life, and salvation with glory in the afterlife (Mt 19:28-30).

As this parable was said after Peter asked Jesus about what they should expect after leaving everything to follow Him; our Lord gave the Jewish hearers a lesson and confirmation of his status as Son of God.

He compared his decision to give his twelve apostles the highest positions in Glory, even above the famous prophets and patriarchs of the Old Testament (Mt 19:28; Rv 21:14) who had plain and public recognition as Men of God, in favor of his twelve unknown disciples, to the sovereign power of God to choose and give as He pleases according to his will (Mk 10:40; Jn 12:26;14:3). This unified Jesus with God the Father in Heaven.

But also explained the great justice of God who in his mercy, He takes pity on those who come to Him late in life and rewards them with the same eternal life in Glory as those who had been with Him all their lives (Lk 15:31-32).

Eternal Life is God’s reward to all those who come to Him through Jesus, in repentance, and He grants them all equal entry into his presence in his mercy, even though some will have more honor than others according to their merits and God’s favor (Mt 18:4; Lk 22:26; Mk 9:35); but not only that. Here Jesus also explains why Israel who knew God and was recipient of the blessings and promises will be soon displaced from the pact, to give way to the gentiles, welcoming them into God’s Kingdom through the work of Jesus, even though they lived in sin and paganism all along (Is 65:1).

Lord Jesus makes plain clear the perfect Justice of God in fulfilling all the promises He ever made to humanity (Mt 20:13), but also his perfect mercy by forgiving all those who repent, saving them not according to their merits, but according to His infinite mercy (Mt 20:9), according to his sovereign will, as Lord of the Universe (Mt 20:15).