PARABLE OF THE TWO SONS 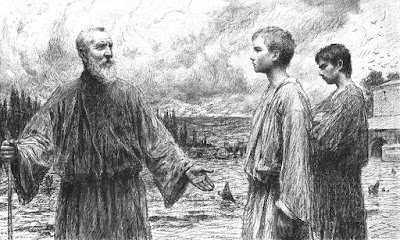 THE PARABLE OF THE TWO SONS

A man had two sons. And he went to the first and said, ‘Son, go and work in the vineyard today.’ 29And he answered, ‘I will not,’ but afterward he changed his mind and went.

31Which of the two did the will of his father?” They said, “The first.”

Our Lord Jesus told this parable to the pharisees who asked Him under whose authority He performed his ministry (Mt 21:23-27). Since the pharisees refused to answer to Jesus what they thought of John the Baptist, He illustrated in this parable the redeeming power of repentance and the guilt that remained over them who for rejected John’s call.

As the first son ended obeying his father after initially refusing, and the second one failed by not doing in the end what he promised to do, the same way the tax collectors and prostitutes, as other people rejected by society as undesirables and sinners, gained forgiveness from God by repenting during John the Baptist’s ministry, while the pharisees confirmed their condemnation by rejecting John’s call to repentance, even when they witnessed the change of life in those who followed John, even when as guards of the Law and the Prophets, they gave initially their allegiance to God, but failed in living according to His will.