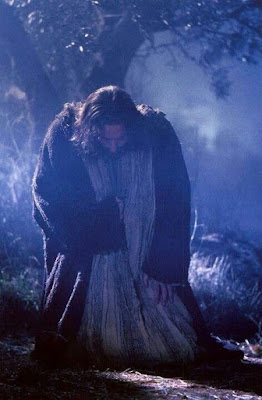 The gospel of Luke mentions Lord Jesus sweating ‘like clots of blood’ during this last night at Gethsemane before his arrest and crucifixion (Luke 22:44).

Many things have been said since the early times of Christianity about this event, with different ideas about in what consisted this phenomenon exactly, but none of them have found final unanimous agreement in the Christian world.

The four canonical gospels mention that Jesus went to pray in the early morning after finishing the last supper with his disciples in the garden of Gethsemane, where he agonized over his coming death (Mt 26:36-46; Mk 14:32-42; Lk 22:39-46; Jn 18:1-11). However, only the account of Luke mentions that in the middle of this anguished and insistent agony, Jesus sweated ‘like clots of blood’ ( καὶ ἐγένετο ὁ ἱδρὼς αὐτοῦ ὡσεὶ θρόμβοι αἵματος ), that fell on the ground.

Various explanations have been given throughout history about this detail.

Verses 43 and 44 are not present in the chapter 22 of Luke’s account  in some older manuscripts where this event is mentioned, in their Latin and Greek versions (1), but it is present in others of equal number and era (2).

The absence of this event in the other three gospels it may be due to the idea that Luke, the reputed writer, was considered to be physician (Col 4:14) and was able to note this detail worthy of mention more than the other writers. However, as many reputable fathers considered them part of the original version, they gained acceptance into the textus receptus of the whole world (3)

WHY DOES NOT APPEAR IN SOME OLD VERSIONS

Some have suggested that the apparition of this event in later manuscripts was an addition to contradict the Docetic heresy, by highlighting the physical humanity of Jesus, and is based on oral traditions of the early times (4). On the other hand, some argue that it was part of the original copies, but was taken away as it can be seen in the Codex Sinaiticus alterations, to protect the Church against Arianism, and that is the reason why it was known in the first centuries (5). However something interesting is to note that Epiphanius of Salamis claims to have seen these verses taken out of hand copies during his time, the 4th century, which implies that given the common knowledge of the existence of these verses, they were not a later interpolation, but were erased at the oncoming of Nicene controversies (6).

EXPLANATION OF THE EVENT

Basically, there have always been two groups; one, that from ancient times saw in this narrative a hyperbole (7), and the other, a medical reality not well known to many (8).

WHAT IT REALLY MEANS

The devil has been in war against God from even before we were created, and among his battle fronts it is to discredit God before creation. He discredited Him in Heaven, and a third of the angels followed him into his disgrace (Rv 12:4).

It is only evil who can conceive alter the Holy Word of God in order to ‘help’ a personal agenda, either to distort the truth, or to avoid corruption of that truth, since God does not need sinful help based on lies.

The passage even though it is not present in many reputable manuscripts, it was well known and quoted by early Christians and martyrs, which strongly challenges the theory of a later fictional addition. On the contrary, being from holy origin, it presented a challenge to the Arian as well as to the Docetic, for the perplexity of seeing Jesus of Nazareth, in material human suffering, but at the same time consoled by divine beings in accordance to his status as Son of God.

Considering that this may be a real part of our Lord’s life, then we need to consider whether this was an allegory or a literal event.

The narrative is classified by internal testimony as a chronicle (Lk 1:1-4), and in this story that depicts the last day of Jesus by presenting a vast collection of historical data to precise the circumstances and manner of his death and resurrection, the sudden apparition of a parable, symbolic illustration or any other kind of fiction, it would be completely out of place, especially coming from an author who had promised to present the historical ‘truth’ of the life of the savior, in comparison to all the ‘traditions’ that people started to build around Him.

From these considerations, we are only left with the theory that it may be a genuine story that happened to the man Jesus of Nazareth, around two millennia ago.

Even though it is not common, there is a medical phenomenon called Hematidrosis, which manifest itself by blood drops coming through the pores of the skin in a sweat like manner (9). There are many reasons why this happen, but one of the cases is a high level of stress.

In history there have been cases of common people who being so afraid of pain, they sweated blood when they expected a terrible execution (10), and even though it is not common, it is real and it happens.

WHAT HAPPENED TO LORD JESUS

As a human, Jesus must have suffered a great deal of anguish as the time of his execution came closer. Indeed, He admitted this when He went to pray at Gethsemane the night of his arrest (Mt 26:38; Mk 14:34). When He said that He was consumed by sorrow to the ‘point of death’, He spoke of a very strong depression in view of the great torture that He was about to endure, and wished for a natural death instead.  It was this human experience that moved Jesus to pray to the Father to avoid Him that suffering if it was possible (Mt 26:39), even though He knew it wasn’t, as He admitted it later (Jn 12:27).

The crucifixion was created as the cruelest form of death, where next to live burning, it was a torture from every angle, from before the actual nailing to the cross, until the last breath of life on it. In his humanity, Jesus fell the anguish of this pain, but never despaired, but maintained his posture to the very end.

Under this stress, He asked his three close disciples, Peter, James, and John, to keep watch with Him. He felt overwhelming loneliness (Jn 16:32), and that is why He asked his disciples to keep Him in company (Mt 26:38,40), but they slept while the Master started to sweat blood while praying (Lk 22:44).

Jesus was so overwhelmed with anguish, that his pores started opening, and his capillaries started breaking, mingling his holy blood with his sweat, that fell to the ground in coagulated form due to the morning weather. Hematidrosis had occurred to Him at that moment, and it came as a consequence of the view of his coming torture, the human desire to escape the situation, and the clash with his divine resolution to carry on his redemptive mission.

His pain was great, but it was even greater for what it meant, the payment for the sins of all humanity. And it became the commencement of his atoning sacrifice by the spilling of blood, which He later consummated by being nailed to the Cross.

Alexandrinus, Vaticanus, and other minors.

Theodore of Mopsuestia, Commentary on the Lord’s Prayer, Baptism and Eucharist, Ch.5.

Also Hippolytus, Eusebius, Epiphanius, Chrysostom, Jerome, Augustine and many others.

Daniel B. Wallace, Revisiting the Corruption of the New Testament: Manuscript,

An Anti-Docetic Interpolation or an Apologetic Omission?