MY YOKE IS LIGHT 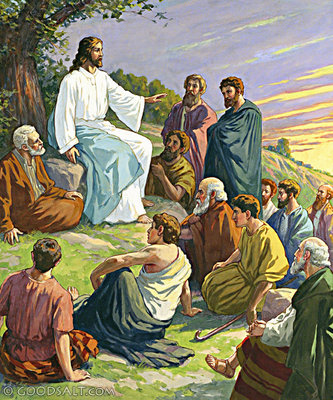 There are three lessons here:

1 - In this occasion, our Lord gives praise to God for his great power in progressing his Gospel, despite the refusal to accept it by the Jewish leaders and the doctors of the time, who in their arrogance refused to accept Lord Jesus as Messiah, even when they recognised his divine approval (John 3:9-12; Luke 7:3). But instead the open heart of the poor and simple were able to accept Jesus as their Saviour, believing in Him and his message.

The same way today, many ‘scholars’ put in doubt the divine inspiration of our Scriptures, by saying they are adaptations from pagan sources; or that they do not belong to the attributed authors, and that they are the natural work of ‘pious’ men of the time, unknown to us; taking thus away all sense of security on their divine guidance, making the supernatural revelation of God into the fallible work of men.  However, this is accepted by simpler believers, who at times are disregarded by these ‘professors’ .

These words of the Lord, echo Psalm 28:2, placing Himself as the bearer of the message that brings praise to the God of Israel who inspired King David to write it, and that is received by small babies and children.

After declaring that all power and authority has been given to Him by the Father, so much as the Son of God, second Person of the Trinity, He is referring also to his human nature, in his condition of Messiah.

As the ‘Anointed of God’, Lord Jesus has been given all authority on Earth and in Heaven to govern in the Name of YHWH. And for this reason, He said that NOBODY knows Him as God does (The Father); neither anyone knows God as HE does.

Through history Christians have tried to understand the process and mechanism of the Incarnation of Jesus as human. Whether He was divine or just human, or both. Whether He had two wills or just one; or whether his two natures were independent from each other or a hybrid type; etc. The fact is that NO ONE can really get to know the incarnation in all detail, because it implies dealing with the divine nature of God-the Son, which is impossible to understand. Therefore, we cannot possibly define the incarnation, save only describe certain aspects of it. That is something that only Lord YHWH knows.

The same way, by saying that NOBODY knowns GOD better than Himself (The Son), Lord Jesus is proclaiming his divine nature, since only God can understand God, and only Him, as human, can make Him available to ‘anyone He choses to reveal Him’.

Only Jesus can truly bring us to God because He Himself is God incarnated. No other religious leader, whether that be Mohammed, or Buddha, or Sai Baba or Guru, or any other philosophy or religious system could get us closer to God, because simply they don’t know Him or how to get to Him. Only JESUS does.

3 – Finally, Lord Jesus extend the invitation to everyone listening, to come and exchange the heavy burden they carry, for His light yoke.

By extending this invitation, Jesus is answering ‘who’ are the ones He desires to reveal the Father to, EVERYONE (Matthew 11:27). Because He makes no specifications to whom his invitation is extended to, it is given to anyone willing to accept it, and those who accept it and come to Him, Jesus will bring them to GOD.

Every human being has the chance to come to salvation in Jesus if they decide to accept his invitation. Everyone is assisted by God’s grace to be free to accept the invitation, free from all human sinfulness and natural distortion. But only those who decide on their own free will to accept it, does the Holy Spirit bring to Jesus, and Jesus never loses anyone who is giving to Him by the Father (John 6:37)

The Jews carried a works-based justification, trying constantly to ‘please God’ by fulfilling the hundreds of commandments Moses had given them. The pagans equally, with their ceremonies; and the atheists carried the burden of a limited, hopeless existence. But in Jesus, all this slavery was ended.

Lord Jesus said, ‘My Joke is light’, because He had a joke, it was not a ‘free entry’ card to Paradise. But this joke was based on Grace, Faith and Perseverance. Not works.

The joke of Jesus consisted in fulfilling God’s will, according to the teachings of Jesus, who were done in love, and not under the penalty of condemnation. Nobody is perfect. Nobody has ever been or will be. Only JESUS is immaculate of sin. Therefore, all Christians, whether they acknowledge it or not, will be saved based only on the sacrifice of Jesus on the Cross, who is the guarantor of pardon at the judgement day for all those who repent and submit to Him. Nobody will ever be found worthy of salvation on their own merits. And this guarantee of salvation, that only demands faith and love from the converts, is much lighter than the dreadful Jewish system of works, and the hopelessness of paganism, with no view of afterlife.