THE KILLING OF ANIMALS IN CHRISTIANITY 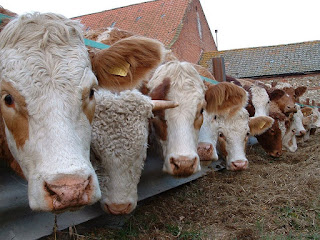 Only God, who has given life to every living creature, be angel, human or animal, has the right to take it away (Deuteronomy 32:39). And indeed, God never intended for any creature to eat living flesh, when He created the world, but to eat plants  (Genesis 1:29-30).

But one thing God did not allow, was the consumption of blood as food.

Since God was the author of life, and this life was sustained in all earthly organisms through the blood stream; God allowed humans to eat animal flesh, but not to touch the blood which sustained that body, but to spill it on the ground, in reverend recognition that life belonged to God alone. This blood was also offered to God in animal sacrifice for the same reason, since it is blood that sustained all life on earth, animal blood was given to God on behalf of the blood (life) of the penitent(Leviticus 17:11; Hebrews 9:22).

Under this idea, we Christians take animal life as food, as we demand a certain amount of protein in our bodies for a healthy existence. Even though there are vegetable products like soy and beans with a high protein contain, they demand vast plantations and high care to produce an equal amount of protein obtained from animal source, present in eggs, milk and mainly meat, for far lesser cost, effort and space, and which constitutes all solid areas of our bodies and brain functioning.

As reverend servants of the Most High God of the Universe, even though Scripture does not order a specific way to kill animals for food, Christians should apply common biblical principles like acknowledgment of God’s sovereignty over all life, prohibition of blood consumption, and mercy overall living creatures; and take animal life in a proper manner, and not in the savage way pagans do, with total disregard for life, as it this life belonged to them.

When we take animal life, there are certain rules we should follow:

1 - Conscious that the animal belongs to God, we should pray to God asking for permission to kill, and this killing can be done only for feeding purposes, never for sport or fun (Genesis 9:3; Leviticus 24:21; Proverbs 12:10).

2 - After having dedicated the killing to God, if the animal is of hot-blood, it should be tied up and the throat cut, enough to let the blood flow freely, and let the animal die of blood loss. It should never be trespassed with a pointing object or beheaded, or burned alive, or killed in any other way that causes unnecessary pain.

If it is a sea animal, they should be entirely taken out of the water and not be cut opened until they are dead.

3 – After the animal has lose all or most of his blood, the blood should be thrown onto the earth (Deuteronomy 12:16), and then the body is free to be cut to desire.

“For every beast of the forest is mine, the cattle on a thousand hills.”

Let us act accordingly, acknowledging that the animal life we are taking belongs to God and not us. And let us slaughter the animal with the respect and mercy it deserves, knowing that it is a concession made to us, to survive and not the original intention of God when He created the world.