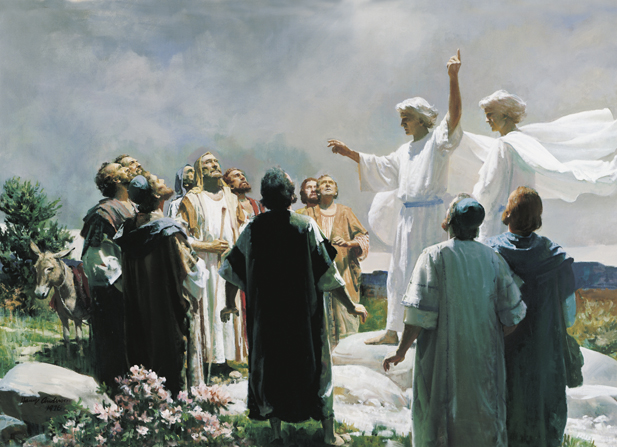 Lord Jesus had called his disciples to Bethany (Luke 24:50-51). This must not be confused with the apparition He made at the mountain in Galilee, where He went to give testimony of his resurrection to most of his disciples, giving them all the Great Commission
(Matthew 28:16-20).

Here our Lord gave the final blessing to his disciples present, and gave them the commission to announce the Good News of Salvation to all humanity, starting from Judea, to the whole world (v.8), but asking them to remain in Jerusalem until the day the Holy Spirit will descend into them, and be gifted with supernatural power, in a different and more permanent way that in the initial commission Jesus gave them when He started his ministry (Matthew 10:1).

Testifying once again about his eternal subjection to the authority of YHWH, Lord Jesus declares that it is not for us to know the time of his Reigning Kingdom, which has been already appointed by the Father Himself.

As our Lord was elevated to the Father’s Glory to take his position at his right side (Luke 22:69; Romans 8:34), and the disciples remained looking into the clouds that covered Him, two angels appeared and announce them that Jesus would return again from Heaven, publicly, as He was taking up, on the same celestial clouds that now had taking Him up to Heaven.

The words of the angels: “Why do you stand looking into heaven?”, are an encouragement to us not to be living of memories gone passed, as if Jesus had left us; but to carry on his commission, knowing that He promised He will be back to stay with us in the Holy Spirit (John 14:18), every day, until his return again from Heaven in Glory (Matthew 28:20; Acts 1:11)