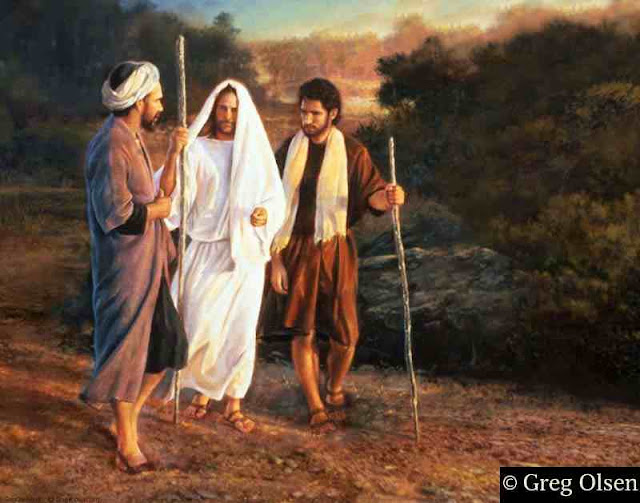 Two disciples of our Lord were going from Jerusalem to Emaus, a small town to the upper west of Jerusalem, towards the Mediterranean Sea but far from it, on the Sunday that He had resurrected.

It is hard to identify them. The narrative mentions the name of one of them, called Cleophas. We do not know if this is the same husband or father to ‘Mary of Cleophas’ (John 19:25), and father of James and Joseph (Matthew 27:56), or someone totally different. But taking into account the fact that he knew the women who had seen the Lord resurrected (Luke 24:22-23), and being Mary of Cleophas among them, it is hard to believe that it was her husband, in total unbelief, and going away from Jerusalem alone.

The other disciple’s name is not mentioned at all.

Our Lord appeared many times to comfort his disciples in their faith for 40 days. So, He also appeared to these two to test them and confirm them in what they were lacking. He blocked their understanding in order that they could not recognize Him and asked them casually about their anxiety.

They welcomed the new comer and explained to Him about Jesus, the crucifixion and the alleged resurrection, told my the women who went to anoint the Lord’s body and Peter and the other apostle, who went to see the empty tomb (John 20:6-10), but expressed also the core of their doubts. They say to Him:

Jesus took control of the conversation and called them “Oh foolish ones, and slow of heart to believe”; and instead of getting angry, out of mercy and love, He proceeded to explain to them all the prophecies the Old Testament had about the Messiah and how they all had been fulfilled in Him. Furthermore, He explained to them how these prophecies included the death they just had seen, but also that the Messiah was meant to come alive again on the third day (John 24:26).

After confirming their faith, Jesus also tested their heart.
Since mental knowledge and faith does not save by itself but must be followed by a true conversion and change of heart; our Lord pretended to continue his walk towards Emaus, while these two arrived to their destiny. But in good faith and gentleness of heart, since the day was ending, they invited of their own initiative Jesus to stay for supper and possibly the night.

Jesus assented, and while blessing the bread of the dinner, He opened their understanding again, and they immediately recognized Him, for the special way of blessing the bread Jesus must have always had. Thus, being confirmed in their faith and their righteousness of heart, our Lord disappeared from in between them.

Out of his infinite mercy, our Lord Jesus Christ supported the unbelief that had taken over all the disciples that are mentioned in the NT, so much the 11 Apostles, as others with them. But the grave mistake of them, was to see only the humanity of Jesus, whom they catalogued as

“A man who was a prophet mighty in deed and word before God and all the people”
(Luke 24:19)

They expected our Lord to give them liberation of the Romans, and to establish a just worldly kingdom as in the times of David and Solomon. They expected to share in his royal glory with positions of power over their nation, but none of that happened.

The redemption this King had brought to them it was far more sublime than an earthly realm, and because it affected the whole universe and so much the spiritual world as the material one, they disbelieved all his previous declarations as a probable total failure.

The same way, today many of us disbelief God, unbelief comes to us, when we do not see God acting as we would expect Him to act.
An unanswered prayer, a sickness that does not go away, financial, professional or family problems, etc; some times we ask God for help or in a certain way, but it does not happen the way we thought it would; and soon enough we find ourselves doubting of God, Jesus and the Holy Spirit.

We must understand that besides all the mercy and love that God has for us, He remains GOD and totally sovereign.

Anything we ever ask of Him, or expect to receive, it is subjected to his approval, and by being infinitely good and wise, He always choses the best for us. And the best for us, goes beyond the material needs we may have. Includes the salvation and sanctification of ourselves, in body and spirit. And we must trust in Him.

A thing that may distract us from Him, a sickness that would keep is humble and reading the Scripture, a Job we did not get to save us from sure danger; etc. All has a motive in the eternal mind of God, and if it is not given to us, it is not because He does not love us, but because it is not good for us at that moment.

And that is besides all those whose prayers are in mistrust of God.

Their lack of faith to start with, will get them nothing from Him.
Let us learn from this example of Scripture and be steadfast and determined in our faith. Imitating the holy men of old in their later faith and holiness and not in their initial unbelief. Let us learn that we came to God in repentance and faith for eternal life and not material gain or any sort.

God has promised us much better things than anything else we can get in this life, even though He also blesses us in this world; but as true citizen of the heavenly kingdom, let us keep our eyes on those things that remain forever and not in this life, where everything eventually ends.

“Looking to Jesus, the founder and perfecter of our faith, who for the joy that was set before him endured the cross, despising the shame, and is seated at the right hand of the throne of God.”
Hebrews 12:2