A SWORD WILL PIERCE YOUR HEART 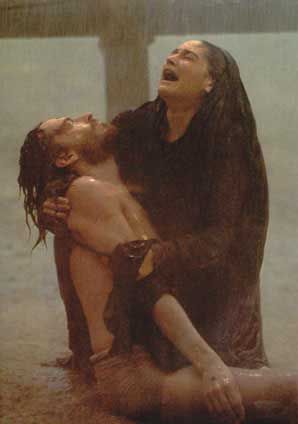 Saint Mary was a humble woman, who gave herself totally to God without reservations, and remained faithful to her call throughout her life until her death.
She could have rejected her mission, but without fully understanding it, she accepted it and trusted in God.

With the greatest responsibility she cared for Jesus during his infancy and childhood. She bathed him, fed him, dressed him, and loved him; the God of the Universe Himself in human form.

She probably taught Him to walk, to read and write, to dress up and to prevent danger; everything a mother does for a child she loves.

She felt more than anyone else on earth his pain, during his life, during his Passion and especially during his crucifixion, because she was connected to him physically, genetically, and spiritually. The anguish she felt was that one that Simeon prophesied 33 years earlier in the Temple (Luke 2:35). No one has ever felt so close to the pain of Jesus than Mary, and no one else ever will.

The Humble Servant, who by the nature of her mission, became the most exalted creature in all Eternity; was once a 14-year-old girl who had no idea of what would become of her, the day she said to the Angel Gabriel :