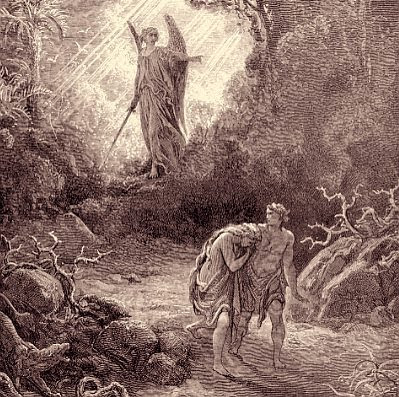 Original Sin or Ancestral Sin, is the theological concept used to describe the condition of the human race after the sin committed by Adam, that provoked an eternal separation from God of the entire human race, and its physical consequences, which are tendency to sinfulness, anomalies of all kinds, and physical death (Genesis 2:17; Romans 5:12).

When God created humanity, He made it perfect and immortal, in accordance with his divine image and likeness (Genesis 1:26, 31). But after Adam broke God’s commandment by eating of the forbidden tree, he fell of God’s favour and because of that separation from his creator, he became mortal, passing this new mortal condition to all his descendants, together with other consequences that this divine disruption caused, tendency to sinfulness, sickness, imbalances and imperfections. But above all, the eternal separation from God due to our irreparable sinful condition.

God could have abandoned humanity in that fallen condition, which implied eternal damnation and an eventual eradication of the human race and possibly the planet, from physical existence. But God who knows all things, foreknew the devil’s work in advance, and prepared an atoning process to achieve the redemption of his work, by providing the life of his only Son, incarnated into the human person of Jesus of Nazareth, so that in the same way as all humanity had lost its relationship with God, they could effectively be forgiven and regain the glorified condition they had lost, and achieve salvation, through Faith, Repentance and Submission to the Him through Jesus.
(Romans 5:18-19; Ephesians 1:4; 2Timothy 1:9; Acts 2:23; Revelation 13:8)

Many ask themselves, why, if God knows everything, would allow the existence of a man whom He knew it would fall into sin, causing this disruption in Creation, or maybe that God created an imperfect human being.

However, God created humanity perfect, and with a perfect freedom of choice, with the capacity to accept or reject Him. God did not intend to create a form of life ‘programmed’ to remain faithful, but that they should truly wanted to live with Him in holiness.

God allowed the existence of the first human who would fall, because He knew that with perfect freedom, not everyone would remain faithful, and that millions of humans will fall into damnation, creating a human pool of pure and impure elements. In order to provide the opportunity of salvation to all, God provided a general atonement for anyone who repented. God allowed the universal fall of mankind, in order to provide an equal universal sacrifice, and that through the same vicarious way that sinfulness passed on to all humanity, his forgiveness and justification should also pass to all humans who repented
(Romans 5:15-16, 18-19).

In other words, Jesus took upon the Cross the punishment due to all humans that ever existed and would exists yet; so that anyone who repented and trusted in Him, may receive forgiveness, justification and salvation
(1Peter 3:18; John 3:16; Hebrews 9:26-28).

Through Church history, this has been a topic of much discrepancy.
Some have always argued that all humans while they are unable to deliberately commit sin, are free from Adam’s condemnation, and that therefore, humans are conceived pure and in union with God, so much, that if they die irresponsible, they will be admitted into paradise on their own merit.

The other extreme, held humans guilty of condemnation since their conception, and therefore unable to be saved unless they are redeemed by Christ, even against their will, through forced infant baptism.

These two extreme views are incompatible with biblical concepts of God.

In the first case, the Bible is very clear and specific that due to the fall of Adam, the whole human race became destitute of salvation, as if they themselves had committed the crime Adam did:

If human being were conceived with God’s Grace in an immaculate state, they would be immortal until each of them sinned consciously; and secondly, they would not need at all of Jesus’s atonement. However, the Scripture says that Jesus died for all humans (Romans 5:18; 1John 2:2).

On the second case, even though all humans are conceived since Adam’s fall, without right to salvation; it would be incompatible with God’s character to simply condemn eternally someone who has not rejected Him consciously. It would be totally against the divine Perfect Justice and Mercy of God, to send to hell millions of humans who would ask themselves, why were they condemned in the first place. Since Jesus already paid for the sins of all humans, all those men and women who have died one way or another before reaching an age of reason, must have their sins forgiven by God in basis of Jesus’s sacrifice for them, so that unless they reject Jesus in the day of their personal judgement, they indeed will be forgiven and admitted into Heaven:

“… not wishing that any should perish, but that all should come to repentance.”
2Peter 3:9

The fact that our Omniscient God allowed Adam to fall into sin, tying all humanity to sinfulness with him; it was really a sign of God’s love, because through this allowance, our freedom of choice was preserved; and the moral justification of vicarious atonement justified, and given freely to humans, in the same way disgrace was handed to us through Original Sin.