WHY DID GOD ALLOW THE CONQUERING OF THE AMERICAN CONTINENT? 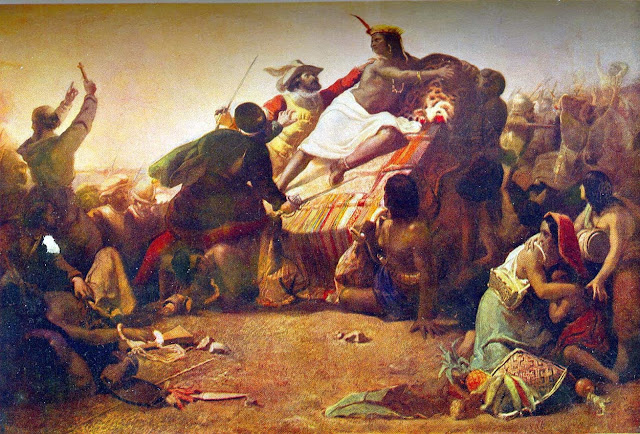 Every Thanksgiving Day, Christians cannot celebrate the arrival of the first English ship to the American Continent, without wondering in their minds why God allowed Europeans to come to this new world, to settle and take over the control of the land from their natural inhabitants, to the point of total transculturation, so much in the Nordic North America, to the Latin Central and South American areas of the continent.

Most leftist and liberals will tell of how unjust this invasion was, and how advanced native Americans were, specially the Aztecs and the Incas in the northern and southern areas of the continent; and how cruel and bloody the annihilation they were subjected to, to almost extinction.

However, historical evidence and biblical study, shows that this is not quite the case.

It was God in his infinite wisdom, who established the Aztecs and Incas as rulers of the continent, until their time was due to see the “light that enlightens all men” (John 1:9). Power corrupted them, and they failed to worship God as it was due, and instead of bringing civilization to a group of primitive tribes, they became abusive, giving themselves to the practice of incest, stealing, lying, sexual promiscuity, witchcraft, murder, genocide, homosexuality, anthropophagy and satanism. The controlling powers would devour human flesh like if it was any animal’s flesh, after they dedicated it as sacrifice to their idols and demons.

For this reason, as it happened before in other parts of the world, God send Christian Europeans to dismantle these two powers, and to stop them from devouring their land. So God allowed a violent invasion, of different European powers almost at the same time, at different parts of the continent, and destroyed these Indian empires with lesser violence than the one they had exercised over their neighbours prior to the discovery of the continent by Columbus.

The proof of that, is the small number of Europeans that destroyed entire empires of millions of inhabitants, like when Hernan Cortez with no more than 500 soldiers, destroyed the Aztec Empire of 5 million inhabitants; and Francisco

Pizarro took over the Inca Empire of 12 million with 180 combatants.  God sent terror to confound the enemy, and punished them for their satanism, by using their own rivalries against each other.

The Europeans brought Catholic, Orthodox and Protestant Christianity to the new continent, called since then America; converting their inhabitants to the Gospel of Salvation, and bringing also civilization, and inserting the new continent to the Western world for ever.

When the time was due again, God decided to grant freedom to this newly Christianised land of America; and the independent movements gave back the control of the land to their nationals.

From these episodes, we must learn how important is to remain faithful to God. Because as he took the land away from their primitive owners due to their evil actions, the same he can also take it away from us now, for the same reasons.
But if we keep God present in our everyday lives, then, the blessings of God will be over us, confirming the leading role he wanted our beautiful continent to have, in the affairs of the world.

“This decision is by the decree of the watchers, and the sentence by the word of the holy ones, in order that the living may know that the Most High rules in the kingdom of men, gives it to whomever He will, and sets over it the lowest of men."
Daniel 4:17