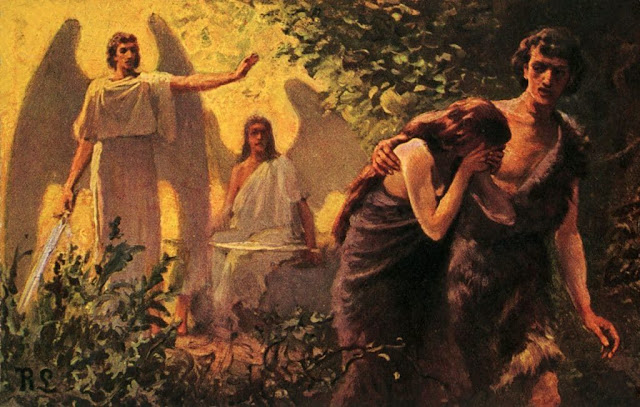 Original Sin is theologically called in the West, as the tendency to sinfulness a human being is born with as a consequence of Adam’s First Sin in Eden (Genesis 2:15-17; 3) and the sub-sequent eternal separation from God that came for the whole human race in Adam’s Sin (Genesis 5:1-8).

WHY WAS ORIGINAL SIN IMPUTED TO ALL HUMANS?

God created Adam in full knowledge of his subsequent fall. This He allowed because if Adam had not fallen into sin, but some other of his descendants, then the Atoning Sacrifice would not have happened, and a large portion of humans would have been lost without opportunity to mercy.

God allowed the fall of the initial human, in order to provide an all- encompassing Atoning Sacrifice on the Cross, during his unique and eternal incarnation. After this had taken place, a unique act of salvation was provided and given for all humans to accept it and benefit from it. That way, no human would be in a certain state of damnation (1Corinthians 15:22; Titus 2:11-12).

And as sinfulness was imputed for free through Adam’s sin, so was Eternal Life imputed on all those who wanted to accept Christ as Lord and Saviour
(Romans 5:15-16, 19).

Adam and Eve’s sinfulness, it is called Original Sin, because it is the first sin ever committed by humans, however its consequences affect the whole of Creation. Humans were born with de decaying physical nature (Sickness, aging and death), but also the whole universe was affected one way or another by the total abandonment from God (Romans 8:19-23).

However, even as we all descendants of Adam and Eve, were separated from God due to our sinfulness, while we are still alive, we are weakened by this post adamic inheritance, but we are still capable to make a free decision over all our personal impaired impulses
(Joshua 24:15; Isaiah 55:6-7; Deuteronomy 30:19-20; Mark 8:34).

IF JESUS PAID ALL OF OUR SINS, ARE NOT WE FORGIVEN?

Lord Jesus did incarnate to save all humanity. He did potentially attained salvation for all human beings even before they could be born and decide to live a life apart from God. But that was not the intention of the trial Adam fell, during the first days of creation.

Adam was set in Eden, as an initial period of trial, before being consecrated immortal and eternal for ever. The original aim from God, was to save only those whose hearts will not show inclination towards evil, naturally.

With this intention, Salvation from Original as well as personal sinfulness, was provided in the payment of Jesus Christ on the Cross (1John 2:2).

So, Lord Jesus paid for all worldly sins, but the effectiveness of his vicarious atonement was only made present to those who through faith and repentance, came to collect that forgiveness guaranteed to them in Christ. In other words, Salvation was there for anyone who believed enough to come and collect it from Jesus himself, at the Cross (2Corinthians 5:21; John 3:14-18).

HOW CAN WE BE FORGIVEN ONCE AND FOR ALL?

Jesus sacrifice is eternal, that is, it is done with a retrospective efficacy, present and futuristic validity, all equal and effective from the moment it was carried out in time and space, physically
(Hebrews 9:12-14; 10:10; John 1:29).

To be saved today from the disgrace of Original Sinfulness and Personal Sin all any human needs to do is to believe in their heart, that Lord Jesus is the Only begotten Son of God, the Promised Messiah, and the Second Person of the Trinity; to believe that his death was vicarious and now he is resurrected; and to proclaim it to anyone around them, and to take Baptism and the Holy Spirit as a seal of that moment of believe and repentance. And to promise to follow Jesus for the rest of their lives.