THE DORMITION OF ST MARY 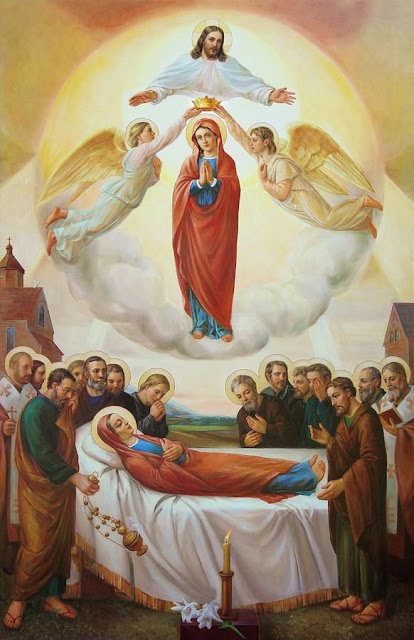 The Christian Church has celebrated the Dormition of St Mary, the Holy Mother of our Lord Jesus Christ from around the 7th century, which also includes the traditional belief that St Mary was resurrected on the third day of her passing, and taken up to Heaven by her Son, Jesus, in a body and soul. (1)

Even though there are not records in Scripture about St Mary’s death and what happened to her afterwards, the Christian belief that Mary was resurrected and taken to Glory grew from as early as the 4rd century and gained acceptance in time. In fact, the Roman Catholic Church declared it a Dogma of Faith in 1950, under Pope Pius XII. (2)

The Biblical grounds for this belief are taken by some to be rooted in a mystical interpretation of certain passages of Genesis and Revelation (Genesis 3:15; Revelation 12:1-6); however most reformed Christians who consider this teaching (Anglicans and Lutherans), base their consideration in the fact that other men of God are assumed to have been resurrected and taken to Glory that had a lesser role than St Mary, like the assumed assumption of Moses (Judas 1:9), the resurrection of the saints after Jesus’s crucifixion (Matthew 27:52-53), and the possible translation of John Apostle (Matthew 16:28; John 21:21-23). It is generally assumed that Lord

Jesus would not have let the holy body of the person who carried Him for nine months in her womb, and nurtured Him in his infancy, should see material decay, having Him the power to stop it at will.

WHAT IS TRULY IMPORTANT

The most important aspect of this celebration however, regardless anyone’s view on the topic, is that in this Feast; Christians commemorate and imitate the life of St Mary, who being a young girl, accepted willingly the great responsibility and eternal honour of becoming the Mother of the Son of God, the Second Person of the Trinity incarnated, the Immanuel, the expected Messiah, and bravely confronted death and persecution with her baby in her arms, from Romans, Herodians and Pharisees.

A time to remember her loyalty, when she alone, accompanied by the brave John Apostle and the two Maries, stood by the foot of the Cross, enduring the scorn and violence done to her son, our Lord Jesus, at close proximity. (John 19:25).

A time to remember when the prophecy of Simeon became fulfilled:
“And a sword will pierce through your own soul”
Luke 2:35