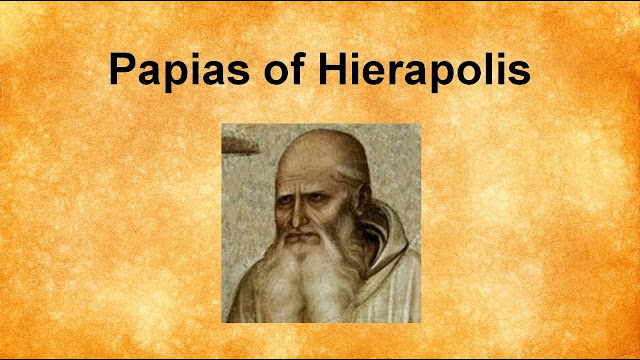 AUTHOR: Attributed to Papias, assumed Bishop of Hierapolis, Hellenic Turkey.
No direct access to the original documents, except through third party writers, like Irenaeus of Lyons and Eusebius of Caesarea.
Papias is said to have been disciple of John Apostle, and contemporary of Polycarp and Ignatius of Antioch.
These are fragments remaining from the original documents allegedly written by Papias and mentioned by third party writers.
DATE: Traditionally, between 95 – 140 CE
RECIPIENT:  General

MAIN POINTS
1 – The author, assumed to be Papias, declares that his motivation to write these teachings of the Lord and their explanations as he himself learned them from the Elders who spoke directly with the Apostles or their direct disciples, is due to the many different versions in circulation during his time – 1, 6
2 – Early reference to Aristion and John the Presbyter, also assumed to have been disciples of John Apostle by extra sources. Papias counts them as trustworthy witnesses – 1, 6
3 – Innocence of character highly valued – 2
4 – Different account of the death of Judas Iscariot than in the NT, said to have lived for a while, with a swollen body, and suffered death as a consequence of being ran over by a chariot – 3
5 – Belief on an earthly paradise after the return of Jesus – 4
6 - Among the saved, some will reside in Heaven, some will reside in Paradise and some will reside on Earth in the New Jerusalem – 5
7 – A Christian goes to the Son through the Holy Spirit, and to God through the Son – 5
8 – There will be no death on the Earthly Kingdom – 5
9 – The Son eternally subjected to the Father – 5
10 – Papias is said to have met the daughters of Philip (Acts 21:8-9), who told him of many miracles they have seen, like a dead man’s resurrection, and about a believer who was poisoned and lived by God’s Grace – 6
11 – There will be a Millennium on Earth after the Second Coming and the Resurrection, where Jesus will govern the Earth personally – 6
12 – Mention of Mark’s Gospel as already written under the direction of Peter Apostle. It is said he wrote things from memory mostly and not in order, but Peter helped him to complete it, but not in narrative order, but with complete accuracy, not omitting or adding anything  – 6
13 – Mention of Matthew’s Gospel as already been written. It is said he wrote in Hebrew – 6
14 – Mention of the Gospel according to the Hebrews (Not in modern canon) – 6
15 – Mention of some Angels given dominion over sections of the world to administer them, but that failed in their mission – 7
16 – Book of Revelation mentioned as already written and of good testimony, approved by Papias, Irenaeus, Methodius, Hippolytus, Gregory Theologus and Cyril – 8
17 – Days of creation said to be figure of periods of the Church (Possible Seventh Day of Rest as the Millennium) – 9
18 – Lord Jesus’s brothers, James, Joseph, Judas and Simon (Matthew 13:55), said to have been his cousins, sons of Mary, wife of Cleophas, and who was related to St Mary, the Mother of the Lord – 10