HELL WHAT IT IS, WHERE IT IS AND WHO GOES THERE 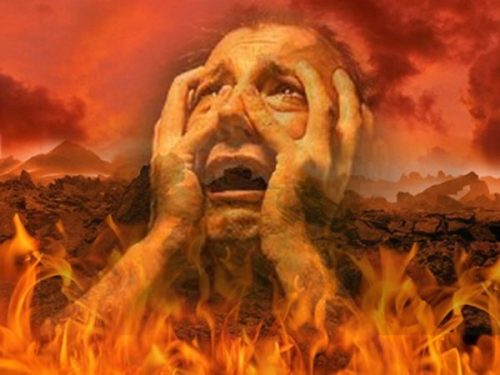 The term “Hell” does no appear in the Bible. The expressions used in both, the Old and New Testaments in regards to the place of the death, are Sheol (שְׁאוֹל) in Hebrew (Psalm 16:10), its Greek equivalent Hades or Ades (ᾌδης)(Luke 16:23), or in an indirect way, Tartarus (Tάρταρος)(2Peter 2:4), and its equivalent Gehinnom (גֵיהִנוֹם) in Hebrew or Geenna (Γέεννα)(Matthew 5:29) in Greek.


However the concept behind our modern Christian idea of Hell or Infernus in Latin, a place of punishment for the wicked after earthly life, it is present in the New Testament.


Apart from the literal meaning of Sheol and Hades, as “Grave”, or “Place of the Dead”, in the common language of Jewish and Christians and other Semite and Hellenic cultures, Lord Jesus gave Hades a different meaning from the dark and silent grave it was supposed to be.


AN INTERIM PLACE OF PUNISHMENT


Lord Jesus referred to Hades as to a place a soul goes after death, where people are confronted with their sins and suffer punishment if it necessary:


And in other places refers to the punishment given to the wicked after the Last Judgement as to Geena:


“And if your eye causes you to fall into sin, pluck it out. It is better for you to enter the kingdom of God with one eye than to have two eyes and be thrown into hell (Geena), where ‘their worm never dies, and the fire is never quenched.’”


Even though the use of the word Geena made reference to a rubbish dump in the outskirts of Jerusalem where human sacrifices were practiced in the past (Jeremiah 7:31) and represented a place of abomination; Lord Jesus used this expression familiar to all to transmit the same idea of rejection in the mind of his hearers about the place of punishment of the wicked after the Last Judgement:


“Then he will say to those on his left, 'Depart from me, you who are cursed, into the eternal fire prepared for the devil and his angels”


From certain teachings of our Lord we gather that there is a state of sorrow and another state of bliss for the spirits of those departed, according to a personal immediate judgement.


Lord Jesus promised the repentant crucified that he will be with Him that day in Paradise (Luke 23:42-43); and Apostle Paul wished his time had come to die to be in the presence of Jesus forever (Philippians 1:23) immediately after physical death; and the dead saints are said to be in God’s presence, praying (Revelation 6:9-11).


On the other hand, the parable of Lazarus and the Rich Man in Luke 16 (Luke 16:19-31), and the very cases of the blessed above mentioned, clearly states the antithesis of their Bliss. A place of punishment immediately after physical death for all those found to be reprobate, where, as in the case of the Rich Man, his suffering is experienced only in spirit.


The doctrine of “Personal Judgement” even though it is not explicitly mentioned in the Gospels, it is understood to exists in order that this assignation of the deceased souls may take place. To divide good from bad implies a selection, and selection implies Judgement, so therefore, there must be a personal judgement immediately after death for this selection to take place.


At this point, in the theological opinions of Christians vary due to lack of further data in the Scriptures.


Some of them totally ignore the passages mentioned above regarding conscious life after death, taking them as allegorical or symbolic, and deny all conscious existence after physical death until the Day of Judgement, where everyone will receive their just reward or punishment accordingly. However, the minority groups that profess this, also deny the permanency of the punishment, doctrine which is clearly expressed in Scripture beyond any doubt.


Other groups of Christians, mostly from Apostolic churches, believe either that the interim condemned status is permanent for some with grave sins and who died unrepentant, but that those who died in last minute repentance or with lesser sins, suffer for a time a punitive period, after which they will be freed, according to their personal sentence, and that will finally enter Glory afterwards. This doctrine is professed mainly by Roman Catholicism called “Purgatory Interim State”.


Some other eastern Christians hold that the interim state is only a waiting status where souls are placed either in temporal spiritual punishment, or temporal bliss, until the Day of the Last Judgement, where with resurrected bodies, all humans will be sentenced to their final and eternal residence, either in the Lake of Fire (Revelation 20:15), or in the Heavenly New Jerusalem or God’s Kingdom (Revelation 21). Those who hold this view, believe that even when a soul has been sentenced momentarily to a place of punishment in Hades or of bliss in Paradise (Luke 16:23; 23:42-43), this situation is not final, and they offer prayers and supplications to God for their forgiveness and salvation. They believe, following certain expressions of Lord Jesus, that some sins can be forgiven after death but before the Last Judgement (Matthew 5:26; 12:32; 18:34; Luke 12:59).

The third majority position, professed mainly by Reformed Christians, is that the interim state is definite, and that souls await in dreadful or glorious expectation, their Last Judgement to eternal damnation or Glory. Still, some minority within Reformed Christians, especially Anglicans, Lutheran and Methodists offer prayers for the dead, asking God to have mercy on the departed before, during and after their Personal Judgement, trusting in God’s mercy and omnipotence.


FINAL STATE – THE LAKE OF FIRE


Most of the declarations about Judgement, reward and punishment in the teachings of Lord Jesus, are referred to the Last Judgement and not to an immediate event after physical death. At this point, which occurs after the Resurrection of all the departed and the Second Coming of Jesus in Glory, most Christians unite again in their beliefs.


Whether Christians believe in a First and Second Resurrection and a Millennial Messianic kingdom, or in a General Resurrection at the Second Coming, they all profess there will be a Last Judgement before the Holy Trinity, where Jesus Christ will be the Judge of all humans (Matthew 16:27; 25:32; Acts 10:42; 2Corinthians 5:10), when the condemned will be send to the Lake of Fire, body and spirit, for all eternity, to be in suffering together with Satan, the Antichrist, the False Prophet and the fallen angels (Matthew 25:41; Mark 9:43; Revelation 20:10-15); and the saved to eternal Glory, in body and spirit to the New Jerusalem or God’s Kingdom.


The immediate Hades is a condition or status. That is clear in Scripture. Given the spiritual nature of the place, the mode of descriptions of Hades as being “a place” (Luke 16:26; Judas 1:6), either in the centre of the Earth as it is believed by some or in any other place in the universe, its unlikely, but not impossible. Whether these are only expressions or literal statements, is of no major consequence. Condemned souls are in a status of suffering, and they cannot scape from it by their own efforts. They are literally confined to that spiritual reality.


The Lake of Fire, which is now empty, is a physical place, from a different form as we understand the material world and physical reality now, designed for spiritual and physical punishment and a place from where nobody can escape, and made to be eternal. Again, in this case, as in Hades, where it is located, we don’t know. But we know, it will be in plain view of God and His angels (Revelation 14:9-11).


God did not create Hell (Lake of Fire), out of vindictive volition, but it was born because of his Perfect Justice. As Supreme Judge of all Creation, He rewards automatically by nature the good and the bad. Goodness is rewarded with honour and glory, but evil and the evil doers are severed from Creation and become receptors of automatic punishment according to their guilt.


The suffering of the Lake of Fire is eternal, as the prophetic Scriptures teach, meaning, there is no possibility of change. The beings that end up in Hell, go there in body and soul, devoid of all Sanctifying Grace. Spiritually, they suffer lament for their lives and past actions, and the desperation of knowing their eternal, final condition. They also suffer due to lack of Divine Communion, which is necessary for all created beings to exists normally.


Physically, they suffer the material effects of the fire and torments proper of the place.