ABOUT PASTORAL CARE TO THE DYING UNDER EUTHANASIA LAWS 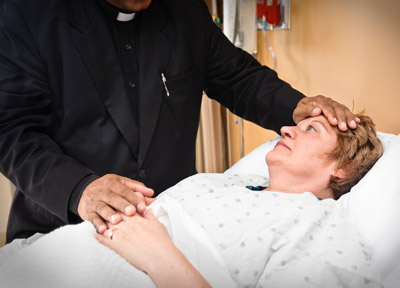 Laws allowing professional assistance for terminally ill patients to end their own lives, have been approved by the government of the State of Victoria, in Australia, and has the potential to extend to the legislation of other states at some point. But now another problem has risen that affects the Christian Church as an institution in a more direct way. Civil powers expect Christian ministers from all denominations to pastorally assists on a regular manner, all those who are choosing to end their own lives and provide them with Christian burial.

The issue is a very delicate one. People choosing to end their lives are individuals under a high level of stress and pain, who apart from enduring extreme physical suffering, face also with anguish, the expectation of a long, tortuous agony before inevitably dying. These people who under normal circumstances would condemn euthanasia, even though at some point make the decision to end their own lives voluntarily, also long to have spiritual reassurance of God’s forgiveness and an expectation of salvation after death.

To address this dilemma, some Christian churches have allowed their ministers to provide that religious assistance to euthanasia candidates, as a non-judgemental act of mercy. This care may vary according to the beliefs and practices of different Christian institutions, but well would include Confession, Extrema Unction and Viaticum (Anointing and Communion) for the dying before ending their own lives, and Church burial afterwards, like any other regular funeral. But is this correct?

From a secular point of view, this approach would be without doubt the right thing to do. A merciful consoling hand to those poor souls in suffering during their last days and minutes, and the dignity of a socially acceptable burial. But there is one problem here, Christianity is a religious belief system that is not necessarily always compatible with a secular view of the world.

I am not going to argue here over the theological grounds of our view on human life, but only explain the stand of the conservative wing of Christianity on the subject.

For Christianity, every human life is sacred, which starts at the moment of conception, and is protected, nourished and cherished as a compound of spirit and matter, created by God and called to greatness and life for all eternity. In Christianity, we believe that we are the administrators of our own lives, but not the owners. As we did not give life to ourselves, we cannot take it away at will either. The lifeforce that animates us, belongs entirely to God alone, and no one has the right to end it, not even ourselves, under any circumstance.

When a person chooses to end his or her own life, for whatever reason, he or she is committing a grave sin equivalent to murder, since the life force they are ending is not really theirs. Regardless of the secular view, when a minister comes and provides words of reassurance and the sacraments to those dying, they are really lying to them, giving them a false sense of hope, we know they don’t have, and becoming participants of the crime.

Certainly, God alone is the ultimate Judge of everyone, and His reasons are not discussible and His own prerogative. If God forgives and accepts someone who kills himself, only God knows, but as far as the Church is concerned, as administrators of the doctrine and sacraments of God, only corresponds to do what any administrator will do, to follow the rules of the house.
Christian ministers cannot possibly assist those who have decided to commit suicide, by providing words of a false reassurance or even commit the sacrilege of giving the sacrament to those sinning mortally against God.

The best help a Pastor or a Priest can give a person who is about to chose to end his or her own life, is to openly warn them that what they do is eternal damnation, trying to encourage them to endure the suffering with the patience of martyrdom, and that eternal life in Glory awaits them afterwards if they remain faithful to God. Any other form of conciliatory approach is misleading and a betrayal of the duties of a servant of the gospel of Christ.

With much pain in my heart, I must roundly condemn that conciliatory approach to support the voluntary ending of life by anyone, as being totally contrary to correct practice and understanding of the Christian doctrine and ethics.

True believers of Christ, conditions are getting more and more difficult for us, as time goes, and very soon, in a matter of decades, we will witness the total abandonment of true religion, to be replaced by a manmade fake form of Christianity, not at the service of God, but to the service of man’s own whims and desires. I encourage Christian ministers and lay people, to resists this control of secular power over the Christian Church, and their desire to rule over spiritual things they do not understand, neither accept.

About these times spoke our beloved Apostle Paul:

“Therefore, take heed to yourselves and to all the flock, among which the Holy Spirit has made you overseers, to shepherd the church of God which He purchased with His own blood. For I know this, that after my departure savage wolves will come in among you, not sparing the flock. Also, from among yourselves men will rise up, speaking perverse things, to draw away the disciples after themselves. Therefore, watch and remember that for three years I did not cease to warn everyone night and day with tears.”
(Acts 20:28-31)

God bless you all.