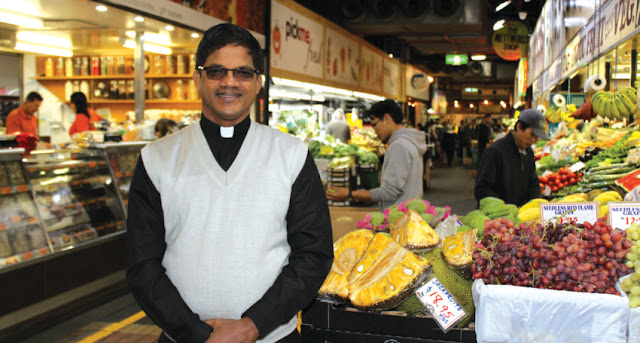 Historically, the Universal Christian Church disposed since ancient times that Ordained clergy should wear their distinct robes at all times, which should not be confused with “Liturgical Robes”, which only are worn for liturgical celebrations. Thus was ordered and binding for the Universal Church according to Canon 27, Quinisext Council of 692 CE:


“None of those who are in the catalogue of the clergy shall wear clothes unsuited to them, either while still living in town or when on a journey:  but they shall wear such clothes as are assigned to those who belong to the clergy.  And if any one shall violate this canon, he shall be cut off for one week.”


Since then, attitudes have changed and Churches have developed their own regulations, some affirming, some modifying and some eliminating totally this rule. This reflects different opinions and approaches as much from the laity as from the clergy themselves. The decision is not easy because it touches deeply the sensitivity of entire congregations one way or another, and deep reflection and reason is needed under the Word of God to make the right decision.


The ministerial cassock, putting aside any medieval superstition, it is a clerical uniform that identifies an ordained minister before society and public life. To wear a cassock, or any other form of distinctive clerical robe, identifies the person who wears it with the job it does in service of society and the Church, very much as a policeman, a nurse or a soldier could be identified by their uniforms. However, even policemen, nurses and soldiers do not exercise their occupations 24 hours a day, so during their private times they do not wear their uniforms. But those are jobs, Christian Ordained Ministry is more than a “job”; it is a life-time vocation.


To wear a cassock protects the Presbyter against temptation, internal and external.


Internally, clerical robes remind the Minister that he is God’s servant, and a Shepherd of souls. His actions and words are observed by many to be followed as example of holiness and as official representative of the Church. This infuses in the Minister, a sense of caution and sobriety of behaviour at all times.


Externally, to be easily identifiable as Man of God, would cause that many people who otherwise would come to him with evil offerings and intentions, will refrain from doing so, reducing thus the danger of exposure to the secular world.


Another side of the dilemma is that a parish priest must not be estranged from his own parish community, but be part of it. To wear a cassock at all times, could create a certain distance between him and his parishioners, making it difficult to mingle and share their lives, especially when the Priest is married, has children and lives under the financial care of the local community. A Minister that wears a cassock while at church grounds or performing religious duties and wears common clothes during his private life or at home, could easily be seen as another member of the parish and accepted as a spiritual shepherd as well as fellow brother of the community, giving a closer and more realistic image to society.


To wear or not wear a cassock is almost a moral dilemma more than canonical. It really affects deeply the physique of all involved, one way or another.


Theologically speaking, the powers of Ordination do not depend at all from the clothes a Minister wears. Every sacred duty and sacrament a Priest celebrates, even the Eucharist, is valid and effective in essence, whether it is done with liturgical Chasuble, Stole, Phelonion, Epitrachelion or in a business shirt.  The issue is entirely canonical.


Each ecclesiastical body should decide over this matter according to the sensitivity of the local community the Presbyter serves. To enforce one way or another in all cases, is proven to be unrealistic and problematic. Both manners can bring positive results if carried out with common sense according to the local circumstances.


But whether a parish Minister wears or not a cassock at all times, does not diminishes at all his spiritual status as an Ordained Minister of God.


IMPORTANT NOTE: This only applies to Diocesan Presbyters. Presbyters who are monks or members of religious orders, or Hieromonks, must without exception wear their respective religious robes in full at all times.