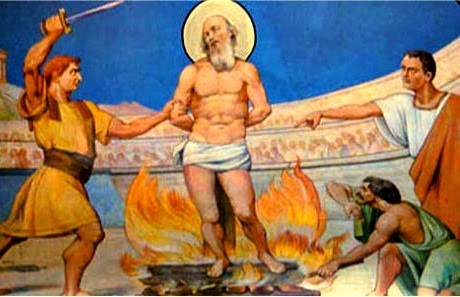 Saint Polycarp was born around 69 of the Christian era. All the information that we have today about him, is contained in the writings of St Irenaeus, St Ignatius, Tertullian, Polycarp’s own Letter to the Philippians, in the anonymous Martyrdom of Polycarp, and Eusebius.


It is assumed according to these accounts that Polycarp was a follower of St John Apostle, who eventually appointed him Bishop of Smyrna, Turkey (1)


According to these sources, St Polycarp suffered martyrdom for refusing to offer incense to the Roman Emperor’s statue.


When sentenced to death, it is said the Roman Consul asked him to consider his old age and accept to worship the Emperor and be spared. At that moment, the Christians present, heard a voice from Heaven:


“BE STRONG POLYCARP, BE STRONG”


To this, Polycarp answered:


“Eighty and six years I have served Him, and He has done me no wrong, How then can I blaspheme my King and Saviour?.


Then the Consul told him that he had lions and tigers to eat him, to which Polycarp answered:


“Call them. It is unthinkable for me to repent from what is good to turn to what is evil. I will be glad though to be changed from evil to righteousness.”


Seeing the Roman Consul that Polycarp was not afraid of wild beasts, he threatened him with burning him alive. But to this Polycarp said:


“You threaten me with a fire that burns for a season, and after a little while is quenched; but you are ignorant of the fire of everlasting punishment that is prepared for the wicked”.


To the surprised face of the Consul, St Polycarp looked to the people screaming for his death, and said to the Consul:


“Stop talking, what are you waiting for?; Bring on whatever you want”


When Polycarp was taken to the pole where he would burn, he told the executioners that he did not need restrains to resists the fire, since God had promised him that He would give him the strength to resists the burning, and that he would not struggle or run away from the fire.


When he was position to be burned, Polycarp prayed:


“O Lord God Almighty, the Father of your beloved and blessed Son Jesus Christ, by whom we have received the knowledge of you, the God of angels, powers and every creature, and of all the righteous who live before you, I give you thanks that you count me worthy to be numbered among your martyrs, sharing the cup of Christ and the resurrection to eternal life, both of soul and body, through the immortality of the Holy Spirit. May I be received this day as an acceptable sacrifice, as you, the true God, have predestined, revealed to me, and now fulfilled. I praise you for all these things, I bless you and glorify you, along with the everlasting Jesus Christ, your beloved Son. To you, with him, through the Holy Ghost, be glory both now and forever. Amen.”


When finally the fire was alighted and the people present saw that the fire was not consuming him; the Roman Consul ordered the executioners to stub him with a dagger. Finally St Polycarp gave the spirit, in the year 156, under Emperor Antoninus Pious.


His dead body was then burned, and his bones collected by the believers to be kept as relics. (2)


St Polycarp together with St Ignatius of Antioch, Papias and St Clement of Rome, are considered in high regard among the Church Fathers for having known the Apostles in the flesh. Their opinions and teachings are regarded in importance second to the New Testament.


St Polycarp is known for his dispute over the date of the Passover, with Roman Pope St Anicetus, who wanted to standardized the Passover to a fixed date in the Christian Calendar, as we have it today; but St Polycarp defended his apostolic custom to celebrate Eastern on the 14th of Nissan, together with the Jews, regardless of when it fell on the week.


St Polycarp is also said to have kept the Saturday Shabbat, as well as the Christian Sunday, the same way it is done today by the Ethiopian Orthodox.


His only surviving work is his Letter to the Philippians. (3)


His feast day is kept on the 23rd February in East and West.


(3)  Polycarp’s Letter to the Philippians


William Cave, Primitive Christianity: or the Religion of the Ancient Christians in the First Ages of the Gospel, 1840, p. 84-85


Alexander Roberts and James Donaldson, Fragments from the lost writings of Irenaeus, The Ante-Nicene Fathers, Vol.1, 1885