THE PEOPLE OF GOD BEFORE AND AFTER JESUS 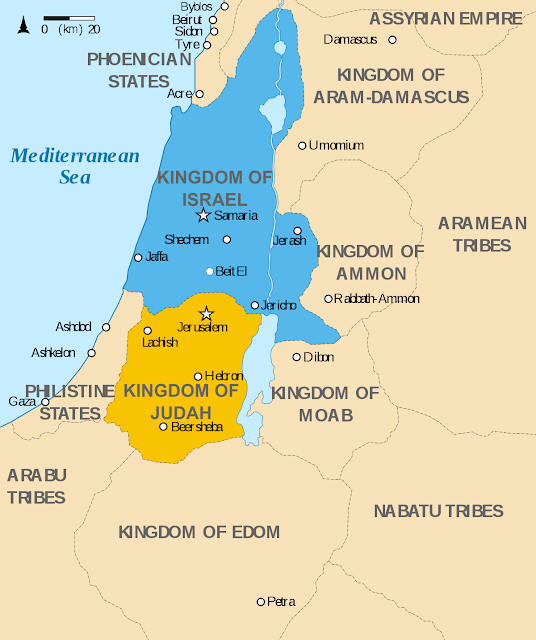 Around the year 930 BC, the united monarchy of the Kingdom of Israel split in between the two of King Solomon’s sons; Israel in the north under Jeroboam I and Judah in the south under Rehoboam.


The Kingdom of Judah retained the Holy city of Jerusalem, the temple and the priesthood, while the Kingdom of Israel established its own version of Mosaic religion at Shechem.


However, even after this schism, God Almighty never abandoned Israel, but maintained his promises to them as they were given when they were one nation with Judah.


Even though only the Kingdom of Judah had the things necessary to worship God as He commanded; and they could be counted as the “original and genuine” Mosaic religion; God sent prophets to Israel and many were born there, like Elijah, Elisha, Hosea and Amos.


When their dispensation was completed, both Kingdoms were destroyed by the Assyrian and Babylonian empires respectively, until the later formation of Judea, where our Lord Jesus Christ was born.


IN THE SAME WAY TODAY, even when the Church has broken into pieces; as genuinely baptized Christians, God continues faithful to all his people on Earth.


This does not mean everyone is right. Our Lord Jesus Christ Himself clearly said to the Samaritan woman from the north, that Salvation came only from the Jews:


“You Samaritans worship what you do not know; we worship what we do know, for salvation is from the Jews.”  (John 4:22)


Nevertheless God never stopped sending Prophets to Samaria, and the prophecies for the future, speak of a restoration of Israel as well as Judah before God:


TODAY, the faithful remnant where the Church of Christ subsists in all her fullness is the new Judea, but God also sees as his children all those Trinitarian Christians who profess the truths of Nicea as one. As  rescued by the blood of Christ and will not allow the devil to take them away from his hand (John 10:28).


These people, who do not walk with us, are our distant brethren. They a born again from the waters of Baptism, and sealed with the Holy Spirit and profess the basic truths of the Creed that unite us from the four corners of the Earth. Total unity must be searched for, and make every effort to attain it, as our Master wanted it:


“I am not asking on behalf of them alone, but also on behalf of those who will believe in Me through their message, that all of them may be one, as You, Father, are in Me, and I am in You.”