THE BIBLICAL STRUCTURE OF THE CHRISTIAN CHURCH 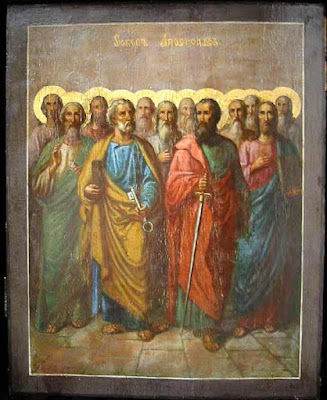 Since her foundation by Lord Jesus Christ, the Church has gone through different structures of organization as it grew in numbers. From being a small group led by twelve men (Acts 2:42-43), to local groups organized in a communal model led by Elders under the authority of the Apostles (Acts 14:23; 15:4), to finally settle in a more hierarchical structure known today as Episcopal system (1Tim 1:3; 4:11; 5:17-19;Tit 1:5).


By the time the apostolic church of the first century was fully organized, it looked like this:


SIMON-PETER: Head of the Apostles, first among equals. Even though Peter was one of the Apostles, he was commended with the leadership of the apostolic quorum. That is why Peter is named first among the Apostles’ names (Mt 10:2; Mk 3:16; Lk 6:14). To Peter were the women sent to announce the Lord’s resurrection in a special manner (Mk 16:7). Jesus appeared to Peter before any other apostle (1Cor 15:5). Peter was given a special grace to serve as support to his brothers in the ministry (Lk 22:31-32; Jn 21:15-17). Paul looked for Peter’s approval before any other (Gal 1:18). Peter presided the first council of Jerusalem (Acts 15:7)


THE APOSTLES OF THE LAMB: Eleven of them counting with Peter, including Matthias who replaced Judas Iscariot (Acts 1:26; Rev 21:14)), minus James son of Zebedee, John’s brother, who died under Herod earlier (Acts 12:1-2)


THE “ÖTHER” APOSTLES: Apostles with great authority, but never of the same status as the original twelve, whose names alone will be written in the New Jerusalem’s pillars (Rev 21:14). Among these are James, the Lord’s brother, and St Paul. Among this also were Barnabas (Acts 14:14), Silvanus and Timothy (2Cor 1:1; 1Th 1:1; 2Th 1:1; Phil 1:1), Apollos (1Cor 1:12; 3:4-5) and Titus (Tit 1:5). Here are also counted the survivors of those seventy disciples Lord Jesus called during his ministry, like possibly Mark and Luke (Lk 10:1). After the first century, the descendants of this type of apostles eventually became known as what we now know today as Bishops.


BISHOPS, PRESBYTERS OR ELDERS: The local authorities in every Christian community, chosen by the people with the approval of the Apostles, and ordained in that office (Acts 6:3; 14:2; 2Cor 8:19; Tit 1:5)(1). Initially called Elders or Πρεσβύτερος (Presbyter), following the Jewish terminology (Num 11:16-17), they were called also Bishops or Eπίσκοπος (Overseer). During the first century, they had not the hierarchical position that was attached to them in the second century, neither was only one in charge of the community, but a group of them. The office of Elder, Presbyter and Bishop were the same, and they administered the local churches under the authority of the Apostles. (1Tim 3:1; Tit 1:5-7)(In Titus 1:5 and 1:7, the Greek terms Πρεσβύτερος and Eπίσκοπος are used for the same office).


DEACONS: Or Servants, (Διάκονος). A third class of Church officials who initially were chosen to assists the Apostles with the everyday duties of keeping the communities, among them cooking and distributing meals (Acts 6:1-3), and preceded the existence of Elders. Later on became assistants of the Elders and their type of appointment changed to a more ecclesiastical context. By the end of the first century, they were considered part of the Ordained Ministry, together with the Elders and the Apostles.


3 – Prophets, Teachers, and other type of Ministerial charisma were not positions within the apostolic church as such, but different types of gifts that were manifested in different individuals regardless their office, whether Apostle, Elder, Deacon or outside the list altogether. (Acts 11:27; 13:1; 15:32)


4 – The office of a single Bishop in charge of different communities and in control of other Elders or Presbyters was gradually established as the Apostles of the first century were dying out, eventually replacing them in office all over the world by the beginning of the second century.


Constitutions of the Holy Apostles, 3:2